The Telescopes of the Future, and What We Will See Through Them 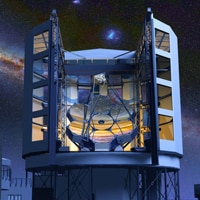 The Hubble Space Telescope might not make it to 2030. Currently operating 12 years beyond its original 15-year lifespan, Hubble’s science operations are slated to end in 2021. A proposed servicing mission could keep the beloved space telescope running even longer, but eventually, the era of Hubble will come to an end. Fortunately, a number of new telescopes, both in space and on the ground, are currently being developed to probe the cosmos like never before. Here is a look the five scopes we are most excited about.