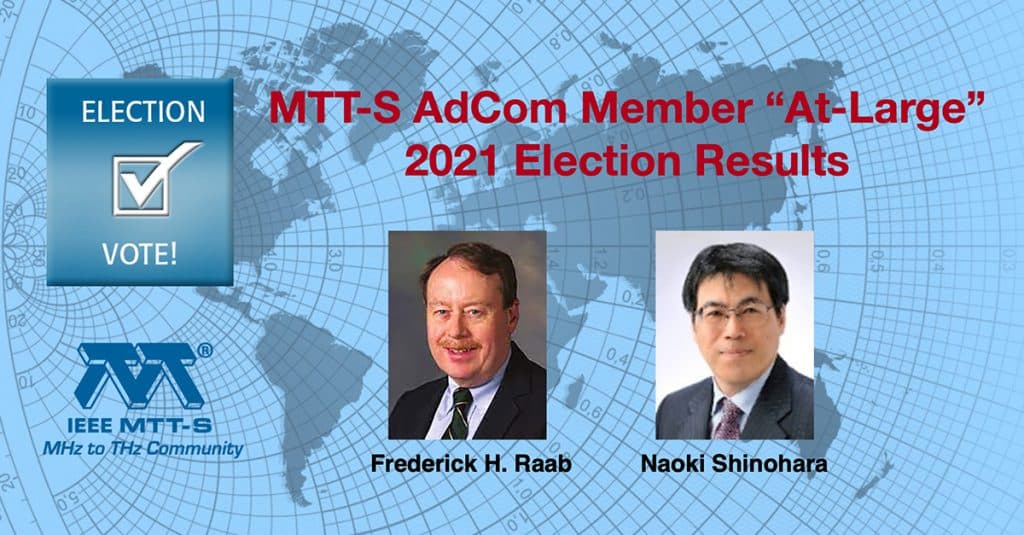 It is a pleasure to announce the 2021 Membership-At-Large Election results reported to us by IEEE.

Frederick H. (Fritz) Raab and Naoki Shinohara have been elected for the three-year term on the MTT-S Administrative Committee (AdCom) from 1 January 2022 to 31 December 2024.

We wish to congratulate our two newly elected members of the AdCom.  We very much look forward to their contributions to MTT-S. The MTT Society also would like to thank all of the candidates for their willingness to serve.

Frederick H. “Fritz” Raab is Chief Engineer and Owner of Green Mountain Radio Research, an R&D firm which he founded in 1980. He received B.S., M.S., and Ph.D. degrees in electrical engineering from Iowa State University in 1968, 1970, and 1972, respectively. He received the I.S.U. Professional Achievement Citation in Engineering in 1995, was named an IEEE fellow in 2006, and received the MTT-S Pioneer Award in 2019. He is coauthor of the classic textbook Solid State Radio Engineering and over 100 technical papers. He was program chairman for RF Expo East ’90 and founded technical committee MTT-17 that expanded the MTT-S to include HF/VHF/UHF engineers. He is a member of IEEE, Eta Kappa Nu, Sigma Xi, AOC, RCA (fellow), and ARRL. “Fritz” is an extra-class amateur-radio operator W1FR (licensed since 1961) and was coordinator of the ARRL 500-kHz experiment which was instrumental in gaining the new 630-meter amateur band.

Naoki Shinohara is a Professor at Research Institute for Sustainable Humanosphere, Kyoto University, Japan since 2010. He received his B.E., M.E. and Ph.D. degrees in electronics from Kyoto University, Japan, in 1991, 1993, and 1996, respectively. He was a Visiting Associate Professor at Institute of Space and Astronautical Science (ISCS), Japan Aerospace Exploration Association (JAXA) in 2007-2009. His research is concerned with far field wireless power transfer (WPT) via microwaves, Space Based Solar Power (SBSP) system, and microwave chemistry.