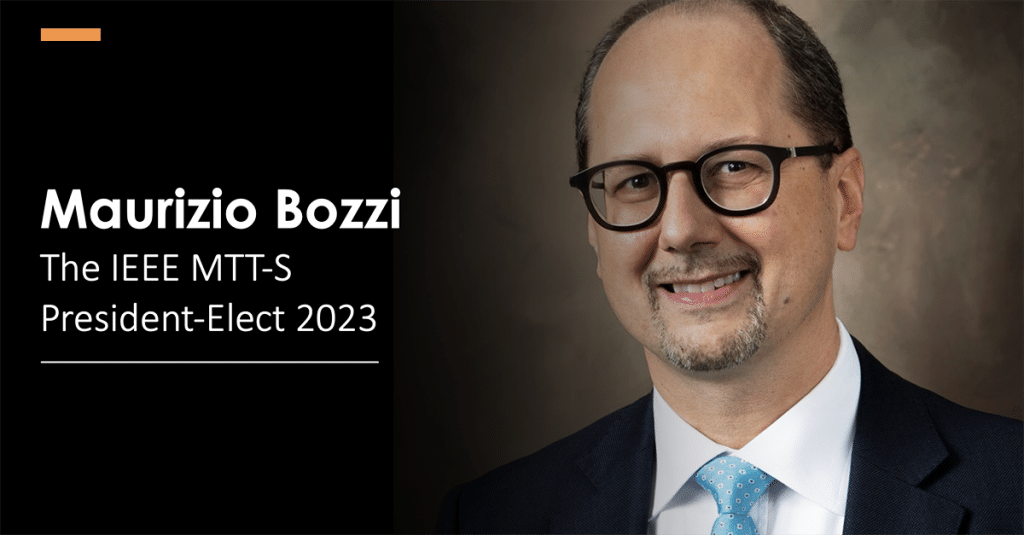 Prof. Maurizio Bozzi has been elected as 2023 President-Elect of the IEEE MTT-S. He will serve as President in 2024.

Prof. Bozzi received the Ph.D. degree in electronics and computer science from the University of Pavia, Pavia, Italy, in 2000. He held research positions with various universities worldwide, including the Technische Universitaet Darmstadt, Germany; the Universitat de Valencia, Spain; and the Ecole Polytechnique de Montreal, Canada. In 2002, he joined the Department of Electronics, University of Pavia, where he is currently a full professor of electromagnetic fields. He was also a Guest Professor at Tianjin University, China (2015-2017) and a Visiting Professor at Gdansk University of Technology, Poland (2017-2018). His main research interests concern the computational electromagnetics, the substrate integrated waveguide technology, and the use of novel materials and fabrication technologies for microwave circuits (including paper, textile, and 3D printing). He has authored or co-authored more than 160 journal papers and 350 conference papers. He co-edited the book Periodic Structures (Research Signpost, 2006) and co-authored the book Microstrip Lines and Slotlines (Artech House, 2013).

Prof. Bozzi is an Elected Member of the MTT-S AdCom for the term 2017–2022. He was the Secretary of MTT-S (2016), the Chair of the MTT-S Meetings and Symposia Committee (2018-2019), and the Treasurer (2020-2022). He was also a member of the General Assembly of the European Microwave Association (EuMA) from 2014 to 2016. He is a Track Editor of the IEEE Transactions on Microwave Theory and Techniques, and he was an Associate Editor of the IEEE Microwave and Wireless Components Letters, the IET Microwaves, Antennas and Propagation, and the IET Electronics Letters. He was the General Chair of the IEEE MTT-S International Microwave Workshop Series-Advanced Materials and Processes (IMWS-AMP 2017), in Pavia, Italy, 2017, of the inaugural edition of the IEEE International Conference on Numerical Electromagnetic Modeling and Optimization (NEMO2014), in Pavia, Italy, 2014, and of the IEEE MTT-S International Microwave Workshop Series on Millimeter Wave Integration Technologies, in Sitges, Spain, 2011.