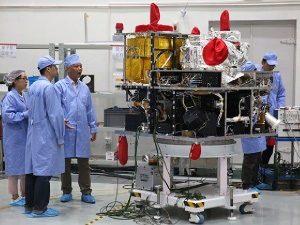 MTT-S members are urged to consider voting against a proposed amendment to the IEEE Constitution that would significantly change the Institute’s governance.

Failure of a transmitter on board any of hundreds of GPS, weather, and communications can interrupt service and hit their operators in the bottom line. In short, reliability in space is essential.

Mobile operators are hunting for extra spectrum to carry their customers’ wireless signals are eyeing the unlicensed patch 5 GHz band that is primarily used for WiFi. WiFi companies object for years that cramming LTE users to these frequencies will interfere with their networks.

Organizers report on the 27-29 July IEEE MTT-S International Conference on Numerical Electromagnetic and Multiphysics Modeling and Optimization in Beijing, China.

A new study shows that that smartphone app performance slows by 15 percent in the summer. Water vapor— which absorbs and scatters radio waves, especially at frequencies above 1 gigahertz—is likely to blame.

Three national metrology institutes got their calibrated national-standard THz detectors together to compare power measurements of ~3mW lasers at 2.52 THz and 0.762 THz. All is well.

Warning: All projections for the Internet of Things are subject to change, most notably the widespread prediction that there will be 50 billion connected devices by 2020. Where did the number come from? And what is the reality?