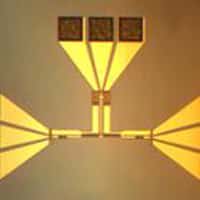 Researchers covet terahertz waves for their ability to deliver data wirelessly at rates as high as 100 gigabits per second. That’s an unbelievably fast rate to achieve over the air, especially when you consider that: a) the average U.S. broadband speed is 55 megabits per second; and b) broadband service is piped into homes on fiber optic cables. For decades, academics have tried to develop terahertz-capable components to bring these exceedingly fast speeds to all of us. Researchers at Tufts University have developed a new terahertz modulator that is the first such device to fit on a chip.