The April magazine issue is out and it features IMS2019 Microwave Week in Boston. This issue features five articles and instead of our regular columns we mainly have columns from the IMS Steering Committee describing what will happen at the IMS. The few regular columns we have are the Editor’s Desk, President’s Column and Guest Editor’s Desk and these also emphasize the IMS. Go straight to the Guest Editor’s column if you want a summary of the issue and the backstory on the feature articles which emphasize innovation. And check out the Editor’s Desk and President’s columns as they will remind you that the IMS is put on by a large number of volunteers known as the Steering Committee – and they have worked literally for years to bring this event to Boston. The twenty seven columns covering the IMS2019 in this issue give you an idea of all that is happening but only hint at all the people involved in making the IMS happen. Also our President, Dominque Schreurs, will remind you that there is no way to see everything in the IMS and other two co-located conferences (RFIC and ARFTG) so you need to plan well. A Technical Program preview and list of Exhibitors is included just to help you plan.

In case you are really busy and need a push to check out the April issue the five feature articles have something for everyone. From the basic physics of Solitons and circulators at the quantum limit we range to the practice of silicon terahertz ICs, nonreciprocal electronic devices, and a tour of how much the outphasing PA has progressed. I look forward to seeing you in Boston! 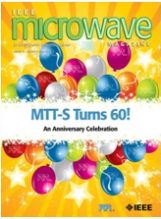