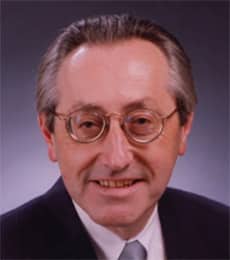 Zoltan J. Cendes, Ph.D. founded Ansoft Corp. in 1984 and served as its Chairman
and Chief Technology O!cer until July 2008 when Ansoft was acquired by ANSYS
Inc. He served as President, Chief Technology O!cer and General Manager of Ansoft
LLC until retirement on December 31, 2009. Dr. Cendes’ original research made many
of Ansoft’s products possible, including HFSS™, MaxwellR and Spicelink™.
He has made signi”cant contributions in the area of “nite element modeling of electromagnetic devices. In particular, he solved the problem of spurious modes that
prior to his work had made the application of “nite element methods in electrical
engineering impractical. He, along with his coworkers, developed new types of “nite
elements called edge elements that eliminate the problem of spurious modes. He
also introduced the Delaunay mesh generation algorithm and adaptive mesh re-
“nement procedures to “nite element analysis, and the trans”nite element method
and model order reduction procedures to high frequency electromagnetics.
Prior to forming Ansoft in 1984, Cendes served six years with the General Electric Corp., “rst in the Large Steam TurbineGenerator Division and then in the Corporate Research and Development Center, where he was responsible for developing “nite element computer codes. In 1980, he was appointed Associate Professor of Electrical Engineering at McGill
University, Montreal, Canada. In 1982, he joined the faculty of Electrical and Computer Engineering at Carnegie Mellon
University, Pittsburgh, PA, where he was Professor until 1996. Cendes received his MS and PhD degrees in Electrical Engineering from McGill University. Dr. Cendes is a Life Fellow of the IEEE, has served on the Editorial Board of IEEE Spectrum,
on the International Steering Committee of the COMPUMAG Conference and on the Steering Committee of the International Workshop on Finite Elements in Microwave Engineering. Dr. Cendes has served as a Distinguished Lecturer of
the IEEE Antennas and Propagation Society (AP-S). He has lectured throughout North America, Europe and Asia on the
topic of electromagnetics and “nite element analysis and has published over 200 papers. Dr. Cendes received the IEEE
AP-S Distinguished Achievement Award in 2008.