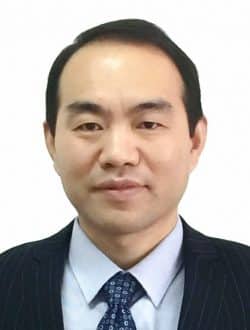 Zhang-Cheng Hao received the B.S. degree in microwave engineering from XiDian University, Xi’an, China, in 1997, and the M.S. degree and Ph.D. degree in radio engineering from Southeast University, Nanjing, China, in 2002 and 2006, respectively. In 2006, he was a Postdoctoral Researcher with the Laboratory of Electronics and Systems for Telecommunications (LEST), École Nationale Supérieure des Télécommunications de Bretagne (ENSTB), Bretagne, France, where he was involved with developing millimeter-wave antennas. In 2007, he joined the Department of Electrical, Electronic and Computer Engineering, Heriot-Watt University, Edinburgh, U.K., as a Research Associate, where he was involved with developing multilayer integrated circuits and ultra-wide-band components. In 2011, he joined the State Key Lab of Millimeter-waves, the School of Information Science and Engineering, Southeast University, Nanjing, China, as a professor. He holds more than 20 granted patents, and has authored/coauthored over 200 referred technique papers. His major research interests involve millimeter-wave, submillimeter-wave and terahertz passive circuits, components and integrated systems.

Dr. Hao has served as the TPC Chair/Co-Chair for multiple professional conferences, and served as a Reviewer for numerous technique journals, including the IEEE T-MTT, the IEEE T-AP, the IEEE AWPL, and the IEEE MWCL, a Guest Editor for the IEEE T-MTT Special Issue on IWS 2018, and an Associate Editor (2019-2022) for the IET Electronics Letters and the IET Microwaves Antennas, & Propagation. He receipts multiple CAREER awards from Chinese government for the contribution of millimeter-wave and terahertz techniques. He is a senior member of the IEEE.