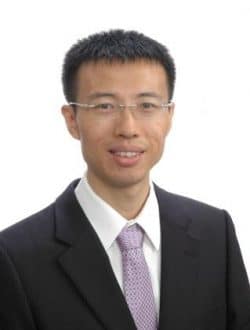 Xudong Chen (M’09-SM’14) received the B.S. and M.S. degrees in electrical engineering from Zhejiang University, Hangzhou, China, in 1999 and 2001, respectively, and the Ph.D. degree from the Massachusetts Institute of Technology, Cambridge, MA, USA, in 2005. Since then, he joined the Department of Electrical and Computer Engineering, National University of Singapore, Singapore, where he is currently an Associate Professor. In 2010, he was an invited Visiting Associate Professor with the University of Paris-SUD 11. During 2012–2013, he took a sabbatical leave at Stanford University, Stanford, CA, USA, where he worked on microwave impedance tomography. His research interests are mainly electromagnetic wave theories and applications, in particular with a focus on inverse problems and imaging. He has published 140 journal papers on inverse scattering problems, material parameter retrieval, microscopy, and optical encryption. Dr. Chen was the recipient of the Young Scientist Award by the Union Radio-Scientifique Internationale in 2010 and the “Engineering Young Researcher Award” in the Faculty of Engineering, National University of Singapore in 2015.

Dr. Chen was the Chair of Technical Program Committee in the IEEE MTT-S International Microwave Workshop Series on RF and Wireless Technologies for Biomedical and Healthcare Applications, 2013, and he was the Guest Editor of the mini-Special Issue in the IEEE Transactions on Microwave Theory and Techniques (T-MTT) in 2014. He has been an Associate Editor of the T-MTT since 2015. He has served on Technical Program Committee, Award Committee, and Organizing Committee of several other conferences. He has organized more than ten sessions on the topic of inverse scattering and image in various conferences.