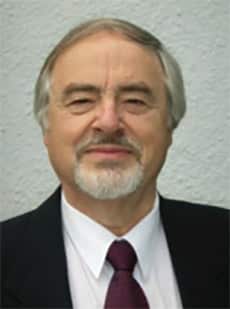 He also held visiting appointments at the Universities of Grenoble, Rome, Nice, Perugia, Munich and Duisburg, the Ferdinand Braun Institute Berlin, the ETH Zürich, AEG-Telefunken in Backnang, CRC Ottawa, the Institute of High Performance Computing in Singapore, and the Georgia Institute of Technoology in Atlanta. He is the Founder and President of Faustus Scientific Corporation. Since November 2009 he holds a position as Principal Scientist at the A-Star Institute of High Performance Computing in Singapore and is the Director of the IHPC Independent Investigatorship Department. His present research interests are in computational electromagnetics with emphasis on time domain modeling and applications in electronics, plasmonics and high-resolution imaging. Wolfgang Hoefer is a Fellow of IEEE (1991), the BC Advanced System Institute (1991), the Electromagnetics Academy (MIT, 1992), the Royal Society of Canada (2003), the German Academy of Science and Engineering (ACATECH, 2007), the Canadian Academy of Engineering (2009), and a Life Fellow of IEEE (2006).

He was Associate Editor of the IEEE Transactions on Microwave Theory and Techniques (1998-2000), Managing Editor of the International Journal of Numerical Modelling (1988-2009), Chair and Co-chair of the IEEE MTT-15 Technical Committee on Field Theory (1989 to 2004), and an IEEE MTT Distinguished Microwave Lecturer (2005-2007). Among other distinctions he received the Peter B. Johns Prize (1990), the ACES Mainstay Award (2004), the IEEE MTT Distinguished Educator Award (2006), and the IEEE Canada McNaughton Gold Medal (2009).

Complex communication and information systems operating in the Gigahertz range often combine multiple analog and digital functions. The design of such systems must capture all electromagnetic effects and interactions that impact their performance. However, it is impossible to model such systems globally at the field and device levels. Therefore, designers must take a hierarchical approach (top-down design) by which the system is conceived at a high level of abstraction and in behavioral terms. The specifications for its functional components are formulated at the network or circuit level. They, in turn, define a physical structure that requires frequency- or time-domain electromagnetic field analysis. Once the functional components have been realized, their actual physical behavior must be analyzed or measured, including possible parasitic

The purpose of this lecture is to familiarize our members with evolving design approaches for systems of large technological and functional complexity, and to demonstrate how microwave modeling and design practices can be integrated into a wider flexible multi-level modeling environment. Techniques for interfacing models at the behavioral, network, circuit and field levels will be demonstrated. They range from order reduction of field models to the coupling of field- and circuit solvers, extraction of equivalent circuits from field solutions and measurements, behavioral representation by neural networks, and the linking of electromagnetic and thermal solvers. The key is to describe different parts of a complex structure by the most appropriate model of lowest possible order, while maintaining a two-way correspondence between functional behavior and physics across the modeling hierarchy.