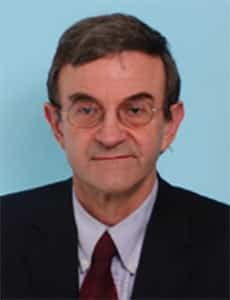 Wojciech K. Gwarek was born in Poland in 1947. He graduated in 1970 from the
Faculty of Electronics, Warsaw University of Technology, Warsaw, Poland. In 1973-74
he spent an academic year at M.I.T. (Cambridge, MA) as a Fellow of the Center for
Advanced Engineering Study. He was also involved there in the work of the RadioAstronomy Group of the Research Laboratory of Electronics. His contribution to
the area of modeling of non-linear devices brought him an M.Sc degree from M.I.T.
(EE’74). Having returned to Poland, he continued his work at the Warsaw University
of Technology, whereat he received his Ph.D. (1977) and habilitation (1988). He is
currently full professor and the head of the Microwave and Radar Division of the
Institute of Radioelectronics, Warsaw University of Technology. His teaching activities include lectures on
electromagnetic theory, microwave technology, and electromagnetic compatibility.
Professor Gwarek’s specializes in the field of microwave technology and electromagnetic theory. Since 1984
he has been concentrating on computational electromagnetics and, in particular, on the theory of the finite
differences time domain (FDTD) method. In the early nineties he was joined by Dr. M. Celuch and together
they published several contributions on FDTD and TLM methods as well as on their formal equivalence. At the
same time, a large part of his effort was devoted to practical implementation of those methods in software
codes. In 1996, together with his three co-workers (M. Celuch, M.Sypniewski, A. Wieckowski) he founded a
company named QWED, in which several software packages for electromagnetic modeling have been
implemented. Brand names of QuickWave-3D and QW-V2D have become known worldwide and brought a
prestigious European IT Prize in 1998 to their developers. QWED also provides consulting services to industry
and Prof. Gwarek is a worldwide recognized expert on industrial design of microwave equipment involving
electromagnetic modeling.
Professor Gwarek is author of more than 200 technical papers and a text book on electromagnetic theory
used in Poland since 1977. For the last 30, years he has been reviewing papers for many of the leading archive
journals and served as a TPC member for many international conferences. In 2008 and 2010 he was a co-chair
of the TPC of the MIKON International Conference on Microwaves, Radar, and Wireless Communication. In the
years 2003-2005 he served as a Distinguished Microwave Lecturer of the IEEE. Since 2001 he is Fellow Member
of the IEEE.