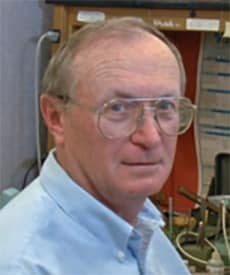 Bill Oldfield was born in Woodhaven , Queens New York. Currently residing in Redwood City,
CA, Bill has been instrumental in many revolutionary developments within the microwave & RF
industry during a career spanning half a century. After being awarded a bachelor’s degree in
Physics from the University of Connecticut, he worked for a microwave company in Boston for
a couple of years before setting out for California. He joined Wiltron Company as an engineer
in September 1963.
During his early career at Wiltron, Bill was responsible for co-pioneering the “ripple technique” with Dr. Peter Lacy. In 1990,
Wiltron was acquired by Anritsu Corporation. Between 1990 and 2001, Bill worked as a Staff Engineer at Anritsu Company,
based in Morgan Hill, CA.
Bill became known as the “father of the 40 GHz K-connector” after he developed the interconnect technology. He also designed
the 65 GHz V-connector and 110 GHz W-connector. All became industry standards. His work on the V and W connectors enabled
coaxial connectors to work through millimeter-wave frequencies. Currently he is working on the 240 GHz Y- connector. Many
of Anritsu’s current microwave test products rely on Bill’s work in passive and interconnect technology research.
In 2002, Bill was honored by the Automatic RF Techniques Group (ARFTG) with the distinguished Career Award. At that time,
it was an honor that had only been bestowed on 20 other professionals. ARFTG awarded him their technology award in 1985
He also was honored as one of the Microwave Legends in Microwave and RF Magazine in August 2006.
Bill has been awarded 31 patents, and has designed more than 600 components and systems operating up to 110 GHz during
his engineering career. He is the author of over 25 papers, and has served as Chairman of the IEEE Standards Committee on
Scattering Coefficients and on the IEEE Standards Committee for Precision Connectors. In 2002, He retired from Anritsu but
has worked as a consultant for the company over the past decade.
Bill resides in Redwood City and having given up kayaking and rock climbing, he enjoys golf, and continues to contribute to
Anritsu’s research and development teams with his expertise.