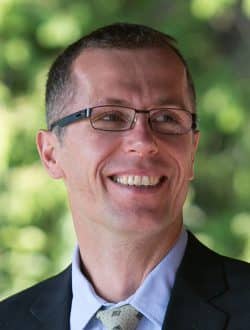 Werner Thiel was born in Altötting, Germany, in 1970. He received the Dipl.-Ing. and Dr.-Ing. degrees from the University of Ulm, Ulm, Germany, in 1995 and 2000, respectively. From 1995 to 2001, he was a Research Assistant with the Microwave Techniques Department, University of Ulm, where he was involved with the development of FDTD software and the design and optimization of nonlinear components in the millimeter wave using the FDTD method. From 2001 to 2003, he was a Research Fellow with the Department of Electrical Engineering Computer Science, Radiation Laboratory, The University of Michigan at Ann Arbor. His research activities and interests were computational electromagnetics with emphasis on the FDTD technique, with applications to microelectromechanical structures (MEMS) and large-scale communication problems. In 2003, he joined EMAG Technologies, where he was developing the commercial FDTD software EMCube. Since 2007, he has been with Ansys Inc. working on SIwave, a specialized hybrid tool for the analysis of PCBs and packages. In 2012, he became the manager of the Signal Integrity R&D group overseeing Ansys hybrid field circuit and integral equation solvers. His research includes advanced numerical methods for the analysis of microwave, millimeter-wave, signal and power integrity, and power electronics applications. He holds 3 patents and more than 25 journal and conference publications.