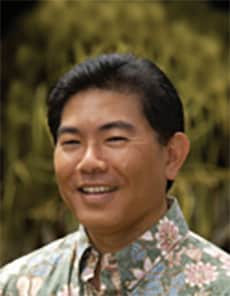 Wayne A. Shiroma received the B.S. degree from the University of Hawaii at Manoa, the M.Eng. degree from Cornell University, and the Ph.D. degree in electrical engineering from the University of Colorado at Boulder. In 1996, he joined the University of Hawaii, where he is currently a Professor of Electrical Engineering and Co-Director of the Hawaii Space Flight Laboratory, which promises to be the fi rst university lab in the world with orbital launch capability. He has published over 70 technical articles, contributed several book chapters, and is a co-inventor on three patents in the areas of retrodirective arrays, spatial power combining, and nanosatellites. He is a co-founder of Pipeline Communications and Technology, Inc., Honolulu, HI, and served as a Member of the Technical Staff at Hughes Space and Communications, El Segundo, CA. In 2003, he received the Regents Medal for Excellence in Teaching, the ten-campus University of Hawaii system’s most prestigious teaching award. Within the past eight years, the electrical engineering honor society Eta Kappa Nu recognized three of his graduating seniors as the most outstanding electrical engineering students in the U.S. Dr. Shiroma has been a member of IEEE for 24 years (S’85-M’87 -SM’08). He was the General Chair of the 2007 MTT-S International Microwave Symposium, held in Honolulu, HI. After serving as MTT-S AdCom Secretary in 2001, he was elected to three consecutive AdCom terms. He has been an Assistant Treasurer since 2002, responsible for reimbursements and reviewing conference budgets. MTT-S committee memberships have included IMS Executive, Budget, Membership Services, Education, Long Range Planning, Publications, and Intersocietal Liaison. He served on the IMS Technical Program Committee for IMS 1999-2006 and 2008-2009, and has reviewed manuscripts for the IEEE Transactions on Microwave Theory and Techniques, IEEE Microwave and Wireless Components Letters, IEEE Transactions on Antennas and Propagation, and IEEE Transactions on Education. Dr. Shiroma’s greatest passion is mentoring students and young professionals. He served as an advisor for recipients of the IEEE MTT-S Graduate Fellowship (2004) and IEEE MTT-S and AP-S Undergradute Scholarships (2005). He helped nurture the formation of the MTT-S Hawaii Chapter in 2008. Following the completion of IMS 2007, he supported the bidding team for IMS 2017 (Honolulu), whose four executive committee members were student or GOLD members of the IMS 2007 Steering Committee.