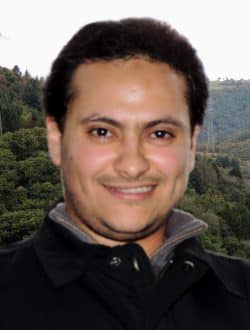 Wael Abdullah Ahmad (S’07–GS’12–M’20) received the B.Sc. and M.Sc. degrees in electronics engineering and electrical communication from Ain Shams University, Cairo, Egypt, in 2007 and 2012, respectively. From 2008 to 2016, he worked on the development of RF/microwave high-power amplifiers and microwave modules in sub-6 GHz and C-band in Egypt. In 2016, he joined the mm-Wave Wireless Group in IHP, Frankfurt, Germany, as a Radar Research Scientist and MMIC Designer where he pursues his Ph.D. degree in mm-Wave BiCMOS radar sensors and integrated antenna technologies.

Wael A. Ahmad’s current research interests include microwave/mm-wave circuits and systems, radar and wireless sensing, MIMO and phased arrays, power amplifiers, interconnection and antenna technologies. He has authored or co-authored tens of publications in his areas of interests and his research work was acknowledged by several international awards. Furthermore, he serves as a reviewer for several journals and conferences and has been an affiliate member of the IEEE MTT-S Microwave/mm-wave Radar, Sensing and Array Systems technical committee MTT-24 since 2021.