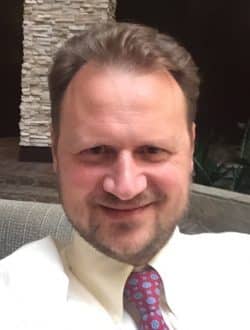 Vladimir Okhmatovski (IEEE M’99-SM’09) was born in Moscow, Russia, in 1974. He received the M.S. degree (with distinction) in Radiophysics and Ph.D. degree in Antennas and Microwave Circuits from the Moscow Power Engineering Institute, Moscow, Russia, in 1996 and 1997, respectively. In 1997, he joined the Radio Engineering Department, Moscow Power Engineering Institute, as an Assistant Professor. He was a Post-Doctoral Research Associate with the National Technical University of Athens from 1998 to 1999 and with the University of Illinois at Urbana-Champaign from 1999 to 2003. From 2003 to 2004, he was with the Department of Custom Integrated Circuits, Cadence Design Systems, as a Senior Member of Technical Staff. In 2004, he joined the Department of Electrical and Computer Engineering, University of Manitoba, Winnipeg, MB, Canada, where is currently a Full Professor.

Dr. Okhmatovski research interests are in the fast algorithms of electromagnetics, high-performance computing, modelling of interconnects, and inverse problems. He published over 50 journal and 80 conference papers as well as a book chapter on various topics of computational electromagnetics. He holds 8 US Patents.

He was a recipient of the 2017 Intel Corporate Research Council Outstanding Researcher Award, 1995 scholarship of the Government of Russian Federation and the 1996 scholarship of the President of the Russian Federation. He received Best Young Scientist Report prize of the VI International Conference on Mathematical Methods in Electromagnetic Theory. He was also a co-recipient of the Best Paper Award of the 3rd Electronic Packaging Technology Conference in 2001 and Outstanding ACES Journal Paper Award in 2007.

Dr. Okhmatovski is a Registered Professional Engineer in the Province of Manitoba, Canada. He supervised/co-supervised 11 Ph.D. and 6 M.Sc. students.