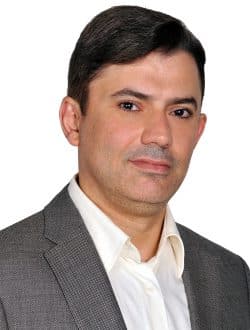 From 2007 to 2010, he worked as an RF-circuit designer at the IUST Satellite Research Center. He then was a research assistant at the Antenna and Microwave Research Laboratory at IUST. In June 2012, he joined the University of Waterloo, Waterloo, ON, Canada, as a visiting scholar. Presently, he is an assistant professor of the department of satellite engineering, IUST, and also serves as the co-director of the Antenna and Microwave Research Laboratory. From June to September 2019, he was a visiting professor at the University of Waterloo. His research interests include applied and computational electromagnetics and microwave circuits.

In 2014, Dr. Nayyeri received the “Best Ph.D. Thesis Award” from the IEEE Iran Section for his research on the modelling of complex media and boundaries in the finite-difference time-domain method. He is a Senior Member of IEEE. He was the General Co-Chair of the “1st National Conference on Space Technology and Its Applications” held in Tehran, Iran, in 2019. He served as a Co-Guest Editor of the journal Sensors, a special issue on “Metamaterials for Near-Field Microwaves Sensing,” in 2019. Currently, he is serving as an Associate Editor for the IEEE Transactions on Microwave Theory and Techniques and IET Microwave, Antennas and Propagation. He is also a Steering Committee member of the Electromagnetics and Photonics Chapter – IEEE Iran Section.