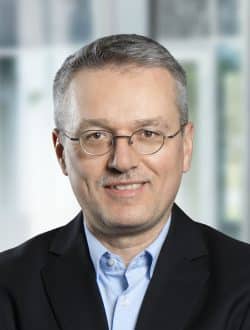 Uwe is the recipient of the first ARFTG Microwave Measurement Student Fellowship Award in 1999 and of the 2003 AHMT Measurement Award presented by the Association of German University Professors for Measurement Science. He received three ARFTG Best Poster and two ARFTG Best Paper Awards, and was a co-recipient of the 2011 European Microwave Prize. He has authored and coauthored more than 100 publications in the fields of on-wafer S-parameter measurements, broadband characterization of high-speed interconnects, high-impedance probing, network analyzer calibration and dielectric material measurements.

Uwe served as Program Chair of the 69th ARFTG Conference and as Co-Chair of the IEEE SPI Workshop (2004 to 2006 and 2010). From 2003 to 2011, he was a member of the ARFTG Executive Committee. Currently he is a member of the SPI Standing Committee, of the MTT-S Technical Committee on Microwave Measurements MTT-3, and of Germany’s URSI Commission A (Electromagnetic Metrology). At present, he is also serving as Vice Chair of the IEEE P2822 standardization effort.