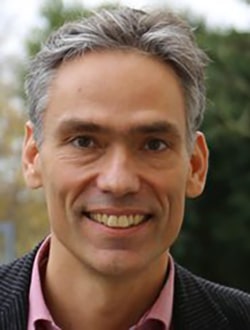 Ullrich R. Pfeiffer, received the diploma degree in physics and the Ph.D. in physics from the University of Heidelberg, Germany, in 1996 and 1999 respectively. In 1997 he worked as a research fellow at the Rutherford Appleton Laboratory, Oxfordshire England. From 1999-2001 he was working as a Postdoctoral Researcher, at the University of Heidelberg on real-time electronics for particle physics experiments at the European Organization for Nuclear Research (CERN), Switzerland. From 2001 to 2006 he was with the IBM T.J. Watson Research Center where his research involved RF circuit design, power amplifier design at 60GHz and 77GHz, high-frequency modeling and packaging for millimeter-wave communication systems. In 2007 he received a European Young Investigator Award and lead the THz electronics group at the Institute of High-Frequency and Quantum Electronics at the University of Siegen, Germany. Since 2008 he holds the High-frequency and Communication Technology chair at the University of Wuppertal, Germany. His current research includes silicon RFICs for mmWave/THz communication, radar and imaging systems.

He was the co-recipient of the 2004 and 2006 Lewis Winner Award for Outstanding Paper at the IEEE International Solid-State Circuit Conference, the co-recipient of the 2006 IBM Pat Goldberg Memorial Best Paper Award, the 2008 EuMIC Best Paper Award, the 2010 EuMC Microwave Prize, the 2014 EuCAP Best Paper Award, and the 2017 Microwave Prize, the 2012 and 2018 Jan Van Vessem Award for Outstanding European Paper at the IEEE International Solid-State Circuit Conference. He has been a Distinguished Lecturer for the IEEE Solid-State Circuits Society and the president of the German Association for Electrical Engineering and Information Technology e.V. (FTEI). In 2020 Ullrich Pfeiffer became an IEEE Fellow.