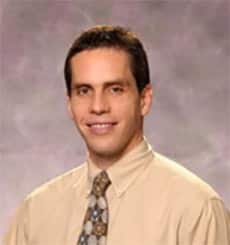 Tom Weller received the B.S., M.S. and Ph.D. degrees in Electrical Engineering in 1988, 1991, and 1995, respectively, from the University of Michigan, Ann Arbor. From 1988- 1990 he worked at Hughes Space and Communications as a Systems Engineer, focusing primarily on Ku-band communications sub-system design and the development of a hardwarebased satellite simulator for high definition television broadcast testing. During this same period he was a software engineer for Edge Technologies, a robotics start-up company. He joined the University of South Florida in 1995, where he is currently an Associate Professor. Along with four faculty colleagues he started the Center for Wireless and Microwave Information Systems (aka the WAMI Center) in which more than 35 graduate and 8 undergraduate research assistants are typically involved each year. He is also the co-director of the National Science Foundation sponsored SKINS IGERT Program at USF, a bio-engineering oriented program that will support 40 2-year Ph.D. fellowships over a 5-year period. In 2001, he co-founded Modelithics, Inc. with Dr. Larry Dunleavy and has led the development of the company’s first software products. He has served as the chair of the Florida West Coast IEEE MTT/AP/EDS chapter, is a member of the MTT Technical Program Committee and the Vice President of Technical Operations for the IEEE Sensors Council. Dr. Weller was a co-recipient of the 1996 Microwave Prize from the IEEE MTT Society, a recipient of a CAREER Award from The National Science Foundation in 1999, and the USF President’s Award for Faculty Excellence in 2003. He has over 70 refereed publications and has been awarded three patents in the areas of circuit modeling and planar circuit design.