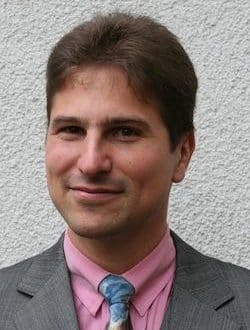 Thomas Zwick (S’95–M’00–SM’06–F’18) received the Dipl.-Ing. (M.S.E.E.) and the Dr.-Ing. (Ph.D.E.E.) degrees from the Universität Karlsruhe (TH), Germany, in 1994 and 1999, respectively. From 1994 to 2001 he was a research assistant at the Institut für Höchstfrequenztechnik und Elektronik (IHE) at the Universität Karlsruhe (TH), Germany. In February 2001, he joined IBM as research staff member at the IBM T. J. Watson Research Center, Yorktown Heights, NY, USA. From October 2004 to September 2007, Thomas Zwick was with Siemens AG, Lindau, Germany. During this period, he managed the RF development team for automotive radars. In October 2007, he became a full professor at the Karlsruhe Institute of Technology (KIT), Germany. He is the director of the Institute of Radio Frequency Engineering and Electronics (IHE) at the KIT. He co-editor of 3 books, author or co-author of 120 journal papers, over 400 contributions at international conferences and 15 granted patents. His research topics include wave propagation, stochastic channel modeling, channel measurement techniques, material measurements, microwave techniques, millimeter wave antenna design, wireless communication and radar system design. Thomas Zwick’s research team received over 10 best paper awards on international conferences. He served on the technical program committees (TPC) of several scientific conferences. In 2013 Dr. Zwick was general chair of the international Workshop on Antenna Technology (iWAT 2013) in Karlsruhe and in 2015 of the IEEE MTT-S International Conference on Microwaves for Intelligent Mobility (ICMIM) in Heidelberg. He also was TPC chair of the European Microwave Conference (EuMC) 2013 and General TPC Chair of the European Microwave Week (EuMW) 2017. From 2008 until 2015 he has been president of the Institute for Microwaves and Antennas (IMA). T. Zwick became selected as a distinguished IEEE microwave lecturer for the 2013 to 2015 period with his lecture on “QFN Based Packaging Concepts for Millimeter-Wave Transceivers”. Since 2017 he is member of the Heidelberg Academy of Sciences and Humanities. In 2018 Thomas Zwick became appointed IEEE Fellow. In 2019 he became the Editor in Chief of the IEEE Microwave and Wireless Components Letters.

During the last years the speed and also the level of integration of monolithic microwave integrated circuits (MMICs) increased drastically. Today’s circuits are able to operate at frequencies up to the sub-millimeter-wave range (= 300 GHz) and combine highly sophisticated systems within one single chip (System on Chip, SoC). These chips have to be encapsulated in packages or modules to make their features available for the clients. Due to the fact that most of those systems require RF interconnections for external antennas or succeeding systems their packages have to fulfill very high requirements at machining and alignment as well as the used packaging materials. For frequencies beyond 100 GHz this normally involves high-quality but expensive and bulky waveguides and machined metal housings. RF modules out of metal offer a very high quality but are very expensive and result in a low level of integration. Due to the huge efforts for the creation of the packages, the price for a module is no longer limited by the inserted MMICs but by the packaging costs. To address a mass market for MMICs operating in the high millimeter-wave range such metal modules are not feasible and have to be replaced by cheaper packaging materials, which, however, come with a couple of additional problems. The plastic packaging materials are quite lossy and the RF interconnection of such a package is limited due to the lead and wire-bond inductances of approximately 1 nH/mm, which prohibit a frequency above 20 GHz. This presentation introduces the idea of a low-cost fully integrated surface-mountable millimeter-wave radar sensor. Different packaging topologies are compared with the potential of integrating the whole radar frontend together with the antennas into a single QFN (Quad-Flat-No-Lead) package. If no high frequency RF interconnect on/off the package is necessary the standard plastic packages come with another advantage, which is their usability within low-cost Surface Mount Technologies (SMTs). A highly complex system in package (SiP) can be picked and placed and finally soldered automatically onto the surface of a printed circuit board (PCB). This however makes it necessary to integrate the antenna together with the MMIC into a single package. In that case only DC and baseband signals have to be conducted through the package-to-board interconnections and thus the requirements for these interconnections are greatly relaxed. Different options how a fully integrated millimeter-wave system can be realized within a surface mountable package will be presented with measurements and different concepts for a low cost surface mountable 120GHz radar sensor in a QFN package will be compared.