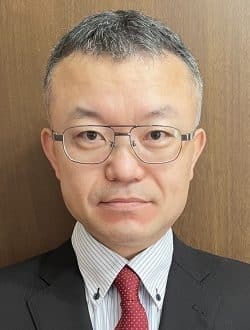 Tetsuya Ueda received the B.E., M.E., and Ph.D. degrees in communication engineering from Osaka University, Osaka, Japan, in 1992, 1994, and 1997, respectively. In 1997, he joined the Department of Electronics and Information Science, Kyoto Institute of Technology, Kyoto, Japan, where he is currently a Professor of Electrical Engineering and Electronics Department. From 2005 to 2006, he was a Visiting Scholar with the Electrical Engineering Department, University of California at Los Angeles (UCLA). His current research interests include metamaterials and their applications.

In the presentation, we review recent progress on dispersion engineering of composite right/left-handed (CRLH) metamaterial lines with nonreciprocal phase shift, based on broken time-reversal and space-inversion symmetries by using ferrite media. By using such nonreciprocal CRLH metamaterial lines, unique and fascinating transmission-line resonators can be designed, referred to as pseudo-traveling wave resonators, with size-independent resonant frequencies, and uniform magnitude of the fields and constant phase-gradient along the resonators. The phase gradient can be dynamically changed under the resonance by tuning the nonreciprocity of the lines, and the tunable phase gradient is implemented to highly efficient beam-scanning leaky-wave antennas with beam squint eliminated. Enhancement technique and dispersion control of the nonreciprocity in the CRLH metamaterial lines are explained for improvement of performances in the microwave circuits and antenna applications.