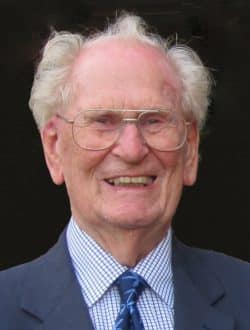 Terence H. Oxley (M73- SM’78-FY2-LF’YY) CEng, MIEE, was born in St Leonards-OnSea, Sussex, U.L, in 1924. He joined the GEC Research Laboratories – later GEC Hirst Research Centre (HRC) in 1946, after four years wartime service in the Royal Navy as an HO (Hostilities Only) Electrical Artificer. Since 1950, Terry’s career in electronics research and development (R&D) has mainly centered on his professional involvement in the broad field of microwave and millimeter-wave solid-state devices and circuits, with particular intent in state-of-the-art low noisc receiver technology: inclusive of the wave-guide point-contact diode era and then advancing through the hybrid microwave integrated circuit (MIC) to the monolithic microwave integrated circuit (MMIC). At HRC, he was responsible for and held several patents in the 1960’s. He progressed through the HRC management structure of Section and Group Leadership, to he appointed Head of the HRC Microwave Components Department in 1975. He was particularly involved with advancing the state-of-the-art in microstrip MIC‘s and its associated active and passive devices, resulting in the Department structuring a commemal hybrid MIC business basis. In 1980 he transferred this business to a GEC Product Company – then Marconi Electronic Devices Ltd, where as Development Manager he was responsible for microwave and millimeter-wave R&D. In 1985, he transferred to GEC Marconi Research Centre (MRC) to take up the appointment of Microwave Research Coordinator for GEC Research Ltd (combining MRC & HRC), with dilgt responsibility to the Managing Director. He was predominantly involved with the GaAs MMIC R&D pmgram at HRC. He retired from GEC in 1988, but continued his microwave engineering involvement as a consultant on an independent basis. Terry has authored or co-authored some 100 scientific/technical publications and has edited many monographs/books/etc. He has participated in many professional committees and working parties, including classified meetings. He has been involved in many worldwide technical conferences: as speaker, panel session member, technical program committee (TPC) member, etc. He has lectured at many UK University microwave courses, including the internationally attended UK Microwave Vacation School series, organized by Leeds University. Awards have included Her Majesty’s Silver Jubilee Medal in 1977 for his contribution to advancements in microwave components; and in 1989, the GEC Nelson Gold Medal for Company technical achievement. Elected as an IEEE Fellow in 1992, he achieved Life Fellow status in 1999. Some of his many professional activities since retirement from the GEC have included: Chairman of the IEEE UKRI MTT/ED/AP/LEO Chapter Administrative Committee; Editor for the IEEE EDS Newsletter; European liaison for IEEE MTTS; and TPC service for the MTT-S International Microwave Symposium, the Military Microwaves and the Microwave & RF Conference events. During this period, he received the IEEE Region 8 Section Volunteer Award and the IEEE MTI-S Meritorious Service Award.