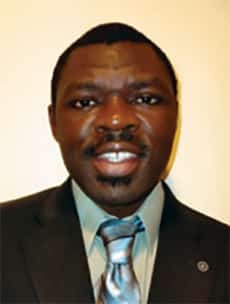 Telesphor Kamgaing (S’00-M’04-SM’05) was born in Baham, Cameroon, where he pursued his primary and secondary education. After graduating from high school in 1990, he moved to Germany on a full scholarship to continue his college education. He received the Diplom.-Ingenieur Degree in Electrical Engineering from Darmstadt University of Technology, Darmstadt, Germany, in 1997 and moved to the United States in 1998. He earned both the M.S. and Ph.D. degrees in Electrical Engineering from the University of Maryland at College Park in 2003. As part of his Ph.D. research, he was one of the fi rst researchers to apply electromagnetic bandgap structures for noise mitigation in high-speed systems. Using inductance-enhanced techniques he successfully demonstrated sub-mm size EBGs in conventional package substrate and for operation below 10 GHz. His lead paper (IEEE MWCL, January 2003) in this area has been cited at least 123 times.

In 1999, he was a guest researcher with the National Institute for Standards and Technology NIST in Maryland, where he was involved in the modeling and applications of silicon carbide devices. From 2000 to 2004 he was with the Digital DNA Laboratories of Motorola Inc. in Tempe, Arizona, where he researched and developed silicon integrated passives and RF modules for wireless communication. He lead early multi-port measurements for on-chip passives and introduced the fi rst broadband compact models for silicon-integrated RF inductors and transformers that utilized non-frequency dependent passive elements to synthesize the frequency dependent losses, leading to more accurate inductance and quality factor modeling, while providing a single model for both frequency and time domain modeling.

In 2004, he joined the Assembly and Test Technology Development division of Intel Corporation in Chandler, Arizona, as a Senior Microelectronic Packaging Engineer and later became a Technology Development Manager, overseeing the electrical analysis of all radio frequency and low-density interconnect packages. He also pioneered the expansion of Intel FCBGA package substrate technology to include embedded RF passives, which are critical in reducing form factor and increasing integration density for converging computing and communication platforms. Since 2007 he has been a Staff Research Scientist with Intel Labs and Components Research, where his research focuses on disruptive packaging technologies involving on- and off -chip radio integration, radio coexistence on ultra small form factor platforms and mm-wave applications.

Dr. Kamgaing serves on the Technical program committee of the Radio and Wireless Symposium, the TPC of the Region 9 International Microwave Workshop Series, the MTT-S undergraduate/pre-graduate scholarship reviewing committee. He has co-organized several workshops associated with IEEE MTT-S conferences and is also a reviewer of the IEEE Microwave and Wireless Components Letters, the IEEE Transactions on Advanced Packaging, The IEEE Transactions on Circuit and Systems and the Journal of Electromagnetic Waves and Applications. He was the recipient of numerous awards including a government scholarship, two best student awards. He is a senior member IEEE, Microwave Theory and Techniques Society, Components and Packaging Manufacturing Technology Society. He has co-authored more than 50 technical papers in refereed journals and conference proceedings. He has three US patents issued and more than 15 patent applications pending. Outside his technical work, Dr. Kamgaing was the 2009-2010 chair of the Intel African American leadership forum, a group of employees dedicated to improving the life of communities in Africa and Latin/Central America through the proliferation of information technology. He also coaches youth soccer in Chandler, Arizona.