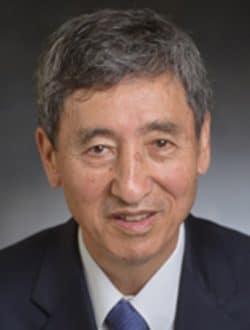 Professor Tatsuo Itoh was born May 5, 1940, in Tokyo, Japan, and passed away on 4 March 2021. He had an incredible career and his list of accomplishments is very extensive. He earned his various degrees at several venues, starting with the Yokohama National University. After spending some time in industry, at NEC and Olympus;he went on to teaching at many places in the US. They include universities in Kentucky, Illinois, California, Texas and his latest being UCLA. During his career he demonstrated the design of many millimeter wave components. Some used planar transmission lines, quasi-optical analysis techniques, quasi-optical receiver elements and antennas.

He served in many capacities in the IEEE MTT-S Society such as the Editor of IEEE Transactions on Microwave Theory and Techniques for 1983-1985; President of the Microwave Theory and Techniques Society in 1990; Editor-in-Chief of IEEE Microwave and Guided Wave Letters from 1991 through 1994; and elected as an Honorary Life Member of MTT Society in 1994. He served as Distinguished Microwave Lecturer on Microwave Applications of Metamaterial Structures of IEEE MTT-S for 2004-2006. He was elected to the National Academy of Engineers in 2003 and to the National Academy of Inventors in 2013. All in all, he graduated 80 PhDs, contributed or wrote 48 books or book chapters and contributed to 1500 research publications. He is survived by his wife, Seiko, his son Akihiro, his daughter, Eiko, and 3 grandchildren.