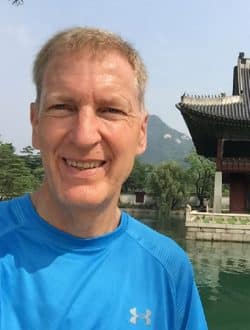 Steven M. Anlage is a Professor of Physics and faculty affiliate of the Department of Electrical and Computer Engineering at the University of Maryland, College Park. He received his B.S. degree in Physics from Rensselaer Polytechnic Institute in 1982, and his M.S. and Ph.D. in Applied Physics from the California Institute of Technology in 1984 and 1988, respectively. His graduate work concerned the physics and materials properties of quasicrystals. His post-doctoral work with the Beasley-Geballe-Kapitulnik group at Stanford University (1987 – 1990) concentrated on high frequency properties of high temperature superconductors, including both basic physics and applications to tunable microwave devices. In 1990 he was appointed Assistant Professor of Physics in the Center for Superconductivity Research at the University of Maryland, then (1997) Associate Professor, and finally (2002) Full Professor of Physics. He was the interim Director of the Center for Nanophysics and Advanced Materials (2007-2009), and is a member of the Maryland NanoCenter. There his research in high frequency superconductivity has addressed questions of the pairing state symmetry of the cuprate superconductors, the dynamics of conductivity fluctuations and vortices, the discovery of the anisotropic nonlinear Meissner effect and microwave applications such as the first superconducting negative index of refraction metamaterials. He has also developed and patented a near-field scanning microwave microscope for quantitative local measurements of electronic materials (dielectrics, semiconductors, metals, and superconductors) down to nm length scales. Prof. Anlage also performs microwave analog experiments of the Schrödinger equation to test fundamental theories of quantum chaos. As part of this work he has developed a statistical prediction model for effects of high-power microwave signals on electronics housed in complex enclosures. He is also active in the emerging field of time-reversed electromagnetics, having developed the first nonlinear electromagnetic time-reversal mirror.

Dr. Anlage is a member of the American Physical Society, the IEEE, the Optical Society of America, and the Materials Research Society. His research is funded by the National Science Foundation, the Department of Energy and the US Department of Defense, and he is an active consultant to the US Government as well as Nazarbayev University in Astana, Kazakhstan. He was a member of the NSF-funded Materials Research Science and Engineering Center at the University of Maryland from 1995-2005. In 2008 Dr. Anlage was appointed a Research Professor of the National Security Institute at the Naval Postgraduate School in Monterey, CA. In 2011 he was appointed a Research Professor at the DFG-Center for Functional Nanostructures at the Karlsruhe Institute of Technology in Germany. He has co-authored more than 180 research papers in scientific journals.