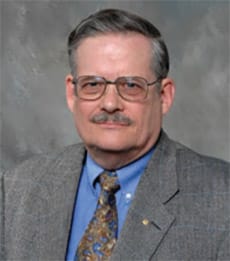 Dr. Steven N. Stitzer received his BSEE, MSEE and PhDEE degrees from Carnegie-Mellon
University in Pittsburgh, PA, in 1970, 1971, and 1974, respectively. He joined the Westinghouse Electronic Systems Group, now Northrop Grumman Electronic Systems, in Baltimore,
MD in 1974, where he is a Consulting Electronics Engineer. He has been involved primarily
with the design, development, production, and automated testing of high power microwave control devices including ferrite circulators and isolators, phase shifters, gas plasma and
diode receiver protectors, high power PIN diode switches and attenuators, and frequency
selective power limiters. He has also worked in the areas of magnetostatic wave !lters, high
temperature superconducting resonators, ferroelectric phase shifters, and micro electro-mechanical systems (MEMS) !lters. He is an inventor or co-inventor on 15 patents and more than
85 disclosures, and several company trade secrets. He has published or presented more than
20 papers and journal articles on these topics.
Dr. Stitzer has been active in the IEEE at the local and national levels. He served as an o”cer
in the Baltimore Chapter of the IEEE Microwave Theory and Techniques Society (MTT-S) and was Chapter Chairman in 1980-1981.
He was Chairman of MTT-S Standards Subcommittee P457 on nonlinear devices in 1980-1982. He served as Publicity Chairman on
the 1986 IEEE MTT-S International Microwave Symposium (IMS) Steering Committee. He was General Chairman of the 1998 International Microwave Symposium. Dr. Stitzer has served on the IMS Technical Program Committee numerous times since at least 1991.
He was elected a Fellow of the IEEE in 2003 for contributions in the area of ferrites. He has been a member of the MTT-13 Microwave
Ferrites and Ferroelectrics Technical Committee since 2003 and served as its Chair from 2006 to 2008.
Dr. Stitzer is the current MTT-S Historian and is Chairman of the MTT-S Historical Collection Committee. He has been directly involved
with the historical exhibit at the International Microwave Symposium each year since 1987, arranging for the display of the permanent collection and working closely with the local historical exhibit chair each year. In his position with MTT-S he works closely with
the National Electronics Museum (previously the Historical Electronics Museum) in Linthicum, Maryland. He is actively involved in
acquiring electronic components, especially microwave tubes, and literature for the museum. He has contributed numerous articles
to the museum’s newsletter Re#ections, frequently including reports on the annual IMS show. He is a Life Member of the museum.
He received a recognition award in 2008 for having donated more than 1,000 hours of volunteer time to the museum. Dr. Stitzer has
been a member of the Board of Directors since 1996 and was President in 2004-2006. He currently serves as Board Secretary.