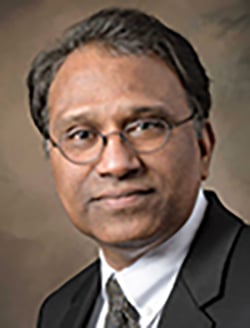 Dr. Sridhar Kanamaluru is the Chief Architect for Curtiss-Wright Aerospace Instrumentation. He has been with the microwave and millimeter-wave industry since his Doctoral Degree in 1996, starting as Senior Antenna Engineer (Millitech Corporation) and then serving as Manager – Microwave Systems (Sarnoff Corporation), Director of Engineering (Herley Industries), and Principal Scientist (DRS Technologies). Sridhar has received seven patents, and has 16 publications in IEEE Transactions and conferences.

Sridhar was the General Chair for IMS2018 held in Philadelphia, and he is a member of the MTT-S IMSEC sub-committee. Sridhar is currently the Secretary of MTT-S AdCom.