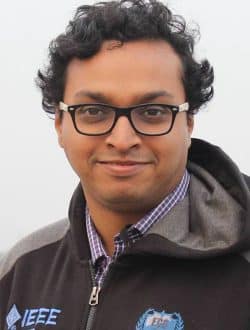 Somak Bhattacharyya has received Honours in Physics from Scottish Church College, Kolkata in 2003. Next to it, he has received both Bachelor of Technology and Master of Technology from Institute of Radiophysics and Electronics in University of Calcutta in 2006 and 2008 respectively. He had carried out the M.Tech thesis in Giant Metrewave Radio Telescope of Tata Institute of Fundamental Research. He is the recipient of University gold medal due to securing first position in M.Tech. He had also served as a Lecturer in Academy of Technology in 2009. He received his PhD degree in 2015 from Indian Institute of Technology, Kanpur, India. He had continued as Senior Project Engineer (Ad-hoc) in the Department of Electrical Engineering in Indian Institute of Technology, Kanpur for a brief period of 6 months after which he had joined Department of Electronics & Communication Engineering at Indian Institute of Information Technology, Allahabad in December 2015. Since 2016 December, he is working as Assistant Professor in the Department of Electronics Engineering at Indian Institute of Technology (Banaras Hindu University), Varanasi. He has published more than 50 International Journals and 90 reputed peer-reviewed International and national conference proceedings. He has received the prestigious Young Scientist Award from International Union of Radio Sciences (URSI) three times: Electromagnetic Theory Symposium 2013 in Hiroshima, Regional Radio Science Conference 2015 in New Delhi and Asia Pacific Radio Science Conference 2016 in Seoul. Owing to his contributions in the area of radio sciences, URSI has conferred him honorary lifetime membership. He has served as potential reviewers to more than 50 journals including IEEE Transactions on Antennas and Wave Propagation, IEEE Antennas & Wireless Propagation Letters, IEEE Microwave and Wireless Component Letters, IEEE Photonics Technology Letters, Electronics Letters, Nature Scientific Reports etc. He has organized 2020 URSI Regional Conference on Radio Science (URSI-RCRS 2020) in IIT (BHU) Varanasi where nearly 300 delegates were present all over India. Dr. Bhattacharyya is an IEEE senior member and has been elected as Life Fellow of The Optical Society of India. He has been elected as the Associate Fellow of West Bengal Academy of Science and Technology as well as Fellow of IETE and Antenna Test and Measurement Society (ATMS), India. Since 2021, he is serving as the coordinator of IEEE Region 10 in the Young Professional Group of MTT Society. He has been inducted in the technical program committee 4 of IEEE MTT Society. Very recently, he has received the innovation award in Microwave field-2021 from IEEE AP-MTT Joint Chapter, Gujrat Section. Under his guidance, IEEE MTT Society Student Branch Chapter IITBHU Varanasi has received the prestigious Outstanding Chapter Award in 2021. His current areas of interest lie in metasurface, periodic structures, opto-microwave devices, microwave photonics etc. For more details, please visit: https://iitbhu.ac.in/dept/ece/people/somakbhattacharyyaece.

Recent Advancements of Metasurfaces for Applications in High Frequencies

Metasurface structures, being ultra-thin in nature has been emerged as applications for various frequency selective surfaces viz., absorber, polarizer, filter, phase-shifter etc. In metasurface based absorbing structures, several sorts of array of metallic patches are designed over a metal-backed dielectric material. The incorporation of metal at the bottom side prohibits the transmission of electromagnetic wave incident to the structure. A number of structures have been proposed over wide band of frequencies ranging from microwave to optical and so forth. Polarization converting structures have also been proposed using metasurface-based designs. In all these designs, asymmetry has been introduced in the unit cell so that the structure is chiral in nature. Both transmittive as well as reflective-type polarization conversion structures using metasurface designs have been reported till date. Very recently, graphene layer has been introduced in the metasurface-based designs to achieve tenability as well as enhancement of bandwidth. By control of applied chemical potential and electrical grating, the plasmonic response of the graphene can be modulated in order to achieve tunability over a wide frequency of incidence. Graphene layer has been incorporated in the unit cell of metasurface to generate wideband tunable applications.