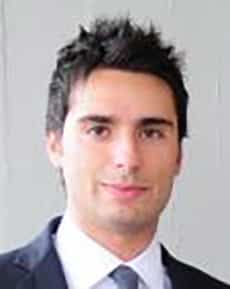 Simone Bastioli (S’10–M’11) received the Ph.D. degree in electronic engineering from the University of Perugia, Italy, in 2010.

He is the Acting Chief Engineer at RS Microwave Company Inc., Butler, NJ, United States, where he is responsible for the design and development of innovative microwave filters, multiplexers, switched filters banks, as well as more complex sub-assemblies for military applications.

Dr. Bastioli is a current IEEE Young Professional (YP), and he was the recipient of the 2012 IEEE Microwave Prize for the invention of TM dual-mode cavities and nonresonating modes. He is the vice chair of the MTT-8 Filters and Passive Components Technical Committee, and he serves as an Associate Editor of the IEEE Microwave Magazine. In 2008, he was awarded with the Best Student Paper Award (First Place) at the IEEE MTT-S International Microwave Symposium (IMS) held in Atlanta, GA, USA, and with the Young Engineers Prize at the European Microwave Conference held in Amsterdam, The Netherlands. In 2009, he was the recipient of the Hal Sobol Travel Grant presented at the IEEE MTT-S IMS held in Boston, MA, USA. He was also awarded the Young Scientist Distinction by the Polish Academy of Science at the 2014 MIKON International Conference held in Gdansk, Poland. His work resulted in several publications in international journals and conferences, as well as several patent applications.

Nonresonating Modes Do It Better!

The innovative concept of nonresonating modes and how this has been recently exploited to extend the performance and capabilities of the state-of-art of microwave filter technology will be presented in this talk. Although the concept is presented by mostly focusing on filters, as these are the components where this new technique has found large application over the past few years, all general features are explained and illustrated in detail thus potentially paving the way for new applications involving other passive microwave components. After a brief discussion highlighting the importance of microwave filters from a system perspective, the main concept of the talk will be introduced by defining what is a nonresonating mode and by illustrating what are the benefits of this approach. The concept is then gradually explained by using some waveguide as well as planar SIW examples, as the rectangular waveguide technology is where these modes were first observed; most importantly, these examples have been proved to considerably ease the understanding of the concepts from both students and non-experts perspectives. The general multimode environment of these structures is described step-by-step and several animations are introduced during the explanation thus really allowing the audience to absorb the more general multimode concept that otherwise often remain an obscure myth for many microwave engineers. The presentation is then extended to the most various filter technologies, such as conventional coaxial structures, dielectric resonators based architectures, as well as more original mixed technologies. The presentation will also cover few examples regarding different applications such as three-port junctions for duplexing purposes, and showing how actually some well-established four-port components have indeed always “unconsciously” exploited some form of nonresonating modes. Several manufacturing examples of actual products developed at RS Microwave (Dr Bastioli‘s affiliation) are going to be presented along this talk, thus also satisfying the more practical taste of an industry audience.