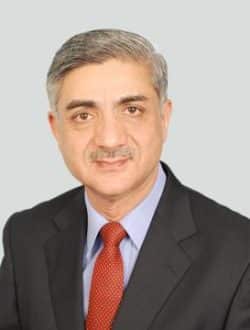 Shiban K Koul is a Professor at the Indian Institute of Technology Delhi. He is also the Chairman of Astra Microwave Products Limited, Hyderabad, a major company involved in the Development of RF and Microwave systems in India. His current research interests include: RF MEMS, Device modeling, Microwave and Millimeter wave IC design and Reconfigurable microwave circuits including antennas.

Dr. Koul has been a member of the IEEE for the past 30 years. He has served as the Chairman of IEEE ED/MTT Chapter, India Council in (1988, 89, 1992, 93, 94, 95). He has also been a member of the executive committee of the IEEE Delhi Section and IEEE ED/MTT Chapter, India Council. He was the past chairman of the Fellow and awards nomination committee of IEEE Delhi Section. Currently, he is the Chairman of Delhi section and also chairman of the Microwave Theory and Techniques Chapter under Delhi section. He is currently a serving ADCOM member and a Member of IEEE MTT society’s Technical committees on Microwave and Millimeter Wave Integrated Circuits (MTT-6) and RF MEMs (MTT-21), Member of India Initiative team of IEEE MTT-S, Membership Services Regional Co-coordinator India, Vice Chair MGA and MTT-S Speaker bureau lecturer.

Recent years have seen rapid changes in RF techniques as well as technology. This trend is continuing enabling the use of increasingly higher RF frequencies with their inherent advantages of smaller size components and larger bandwidth. In particular, the use of planar circuit architecture and integration using micro-machining technology has opened up new opportunities in terms of reduction in cost, weight, volume, power consumption as well as extension of operating frequencies. In keeping with the advances in technology, the design approach is also undergoing a rapid change through improved digital signal processing (DSP) techniques and CAD tools. Thus the scope of RF Design Techniques and Technology, that was confined to lower microwave frequency bands (~10 GHz), has expanded to encompass the millimeter wave frequency band (30-300 GHz). This paradigm places new demands on Microwave Education. The responsibility of microwave educators today is to drive students beyond the basic concepts to circuit and system level practical hands-on-education in order to produce highly skilled and motivated wireless engineers who are directly usable to the industry.

The present talk is focussed to motivate students to opt for career in RF and Microwave Engineering. Starting with the behavior of conventional circuit elements at RF and Microwave frequencies and describing equivalent lumped circuit models of distributed transmission line elements, different technologies available to a designer to built Microwave and Millimeter Wave Integrated Circuits and subsystem will be presented. Starting from conventional microstrip technology, other key technologies including suspended stripline, dielectric integrated guides, fin line, MMIC, RF CMOS and LTCC will be briefly described. Design methodology including use of existing CAD tools leading to development of several high performance components/ subsystems at lower microwave frequencies as well as millimeter wave frequencies centered around 35 GHz, 60 GHz and 140 GHz will be presented. Micromachining has recently been applied to millimeter wave field to create low loss and high performance components and antennas. Methodology for the design, development and fabrication of passive components, antennas and switches at millimeter wave frequencies will be described next. Concept of developing reconfigurable RF circuits using either variable capacitors or switches will then be briefly presented. Future research activities in our group in the area of RF Nanotechnology will also be discussed. In the end, practical demonstration of several pre-fabricated passive and active components at Microwave frequencies will be given using a handheld network analyzer and special custom made test jigs.

Millimeter waves offer widespread applications in defense, space and commercial sectors. In this talk, different technologies for building Millimeter Wave Integrated Circuits and Subsystems will be presented. Starting from conventional microstrip technology, other key technologies including suspended stripline, dielectric integrated guide, finline, LTCC, MEMS, MMIC and polystrata will be described. Design methodology leading to development of several high performance components/ subsystems at 35 GHz, 60 GHz and 140 GHz along with experimental results will be presented. The talk will conclude by giving a comparison of various technologies.

Micromachining has been applied to microwave and millimeter wave field to create low loss and high performance passive/active components and antennas. In this talk, starting from Modeling of transmission lines and discontinuities, design procedure to realize passive components will be presented. Next, design, modeling and fabrication of different types of micromachined antennas will be described. Methodology for the design, development and fabrication of RF MEMS switches on GaAs will then be presented. The schemes for developing reconfigurable RF MEMS circuits using either variable capacitors or RF MEMS switches will be discussed. The reconfigurable circuits include: a band pass filter, band stop filter, high isolation switch and a patch antenna.