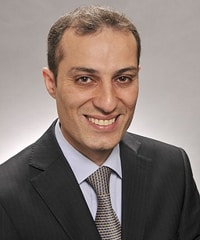 Shahrokh Saeedi (S’12–M’16–SM’19) is a lead RF system engineer and program manager at Boeing Research and Technology, Solid State Electronics Development. He received the B.Sc. and M.Sc. degrees (Hons.) in electrical engineering from the Iran University of Science and Technology, Tehran, Iran, in 1999 and 2002, respectively. He received the Ph.D. degree in electrical and computer engineering from The University of Oklahoma, Norman, OK, USA, in 2015. From 2002 to 2004, he was with the SAMA Company, Tehran, as an RF Design Engineer. From 2004 to 2011, he was with the SAER Engineering Company, Tehran, as a Senior Research and Development Engineer and a Project Manager, where he was involved in RF/microwave sub-system and system design. He was a researcher at Advanced Radar Research Center (ARRC), Norman, OK from 2012 to 2019. Prior joining Boeing, he was a Research Associate and Fabrication Lab Manager with ARRC, where he was involved in design of miniaturized microwave filters for integration with the next generation of multifunction phased array radars for air traffic surveillance and weather applications.

His research interests include design and development of high-power reconfigurable and conformal antennas for agile radar systems, advanced filter synthesis and design for widely adaptable RF front-ends in cognitive radios and radar systems, microfluidic RF electronics, and rapid fabrication and additive manufacturing of microwave and millimeter wave structures. Dr. Saeedi’s research received several awards including the Best Student Paper Awards in 2019 IEEE Texas Symposium on Wireless and Microwave Components and Systems, the 2018 IEEE International Symposium on Antennas and Propagation, the 2019 and 2017 IEEE Wireless and Microwave Technology Conferences, and the 2016 IEEE Radio Wireless Symposium. He was a Co-Founder and the Chair of the IEEE MTT-S Student Branch Chapter, the University of Oklahoma. He is a member of the IEEE Microwave Theory and Techniques Society (MTT-S), the IEEE Antennas and Propagation Society (AP-S), and a reviewer of various IEEE and IET conferences and journals.