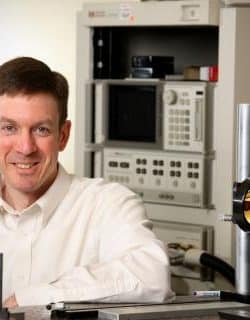 N. Scott Barker received the B.S.E.E. degree from the University of Virginia in 1994 and the M.S.E.E. and Ph.D. degree in electrical engineering from the University of Michigan, Ann Arbor, in 1996 and 1999 respectively. In 1999 he joined the Naval Research Laboratory as a staff scientist in the Microwave Technology Branch. He is currently the Associate Dean of Academic Affairs and Professor of Electrical and Computer Engineering at the University of Virginia, Charlottesville. His research interests include applying MEMS and micromachining techniques to the development of millimeter-wave and terahertz circuits and components. He has over 100 publications and several patents in this field. In 2011 he co-founded the company Dominion MicroProbes, Inc., to develop and market THz frequency technology co-invented by his group at the University of Virginia, including 500-750 GHz and 750-1100 GHz on-wafer probes. Prof. Barker has served on the IEEE Microwave Theory and Techniques technical committee on RF-MEMS (MTT-21) since 2000 and was the committee chair from 2008 to 2011. He has also served on the IMS Technical Program Review Committee since 2001. He served on the Steering Committee of IMS2011 in Baltimore, was the TPC co-chair for IMS2014 in Tampa, FL, and is Co-General Chair for IMS2024 in Washington, D.C. He served as an Associate Editor of the IEEE Transactions on Microwave Theory and Techniques from 2010 to 2013, and as Editor-in-Chief of the IEEE Microwave and Wireless Components Letters from 2016-2018. He is currently serving as the Chair of the Publications Committee for the IEEE Microwave Theory and Techniques Society. Prof. Barker received the 2016 Edlich-Henderson Innovator of the Year Award, the 2012 IEEE MTT-S Outstanding Young Engineer Award, the Charles L. Brown Department of Electrical and Computer Engineering Outstanding Teaching Award in 2015, the New Faculty Teaching Award in 2006 and the Faculty Innovation Award in 2004. He is an IEEE Fellow, a recipient of the 2003 NSF CAREER Award, and was awarded the 2000 IEEE Microwave Prize for his work on RF-MEMS Phase Shifters.

In order to reduce the packaging requirements for RF-MEMS devices we have developed a switched capacitor technology with minimal contact. Although this switched capacitor design results in a reduced capacitance ratio in the range of 5-10 we have also developed circuit designs for phase shifters and tunable matching networks (and the same can be done with filters) which do not require a capacitance ratio over 10. In addition to packaging, another Achilles’ heel for RF-MEMS has been the uncertainty in pull-down voltages due to residual stress that is built into the beam during fabrication. We have successfully identified the major contribution of this stress to thin-film gold beams and are now able to routinely fabricate thin-film (< 1 micron thick) gold cantilevers with almost zero tip deflection upon release, and fixed-fixed beams with a pull-down voltage that nearly matches the analytical model without the need for adding on an unknown stress term.