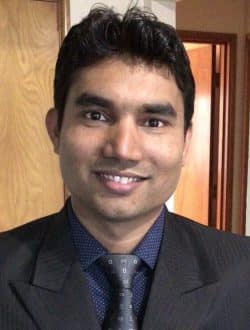 Sanket Jain received the B.E. (Hons) degree in Electronics & Instrumentation from Birla Institute of Technology & Science, Pilani, India in 2009 and the M.Sc. in Electrical Engineering from Swiss Federal Institute of Technology, Lausanne, Switzerland in 2013. From 2013 to 2014, he worked as a Scientific Collaborator at the Institute of Microengineering, Neuchatel, Switzerland. In September 2019 he completed his doctoral degree at Oregon State University where his research focused on RF and mm-Wave transceiver design. Since then he is with Apple Inc working as an RFIC design engineer.

Dr. Jain serves as a reviewer for TBIOCAS, TCAS-I, MWCL, TMTT, and JSSC. Dr. Jain was awarded the Swiss Government Scholarship from the Swiss Embassy, EPFL (2011-13), the International Scholarship from K.U. Leuven, Belgium in 2012, and the Rickert Engineering Fellowship at Oregon State University in 2014. In 2018, Dr. Jain was awarded the Analog Devices Outstanding Student Designer Award.