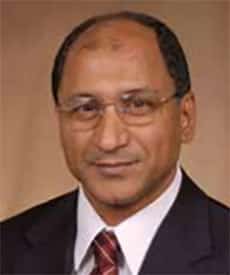 Samir M. El-Ghazaly currently serves as the Director of the Division of Electrical, Communications and Cyber Systems at the National Science Foundation. He is also a Distinguished Professor in the Department of Electrical Engineering at University of Arkansas. Dr. El-Ghazaly received his Ph.D. degree in Electrical Engineering in 1988 from The University of Texas at Austin. After graduation, he joined Arizona State University as an Assistant Professor in the Department of Electrical Engineering, where he became Associate Professor in 1993 and Professor in 1998. From August 2002 to July 2007, he was with The University of Tennessee, Knoxville, as Professor and the Head of Department of Electrical and Computer Engineering. He trained and worked at several universities and research centers including Cairo University; the Centre Hyperfrequences et Semiconducteurs at Université de Lille I in France; NASA’s Jet Propulsion Lab in Pasadena, California; CSTMotorola, Inc.; iemn, Université de Lille, France; and the Swiss Federal Research Institute (ETH). His research interests include microwave and millimeter-wave semiconductor devices and circuits, semiconductor device simulations, electromagnetics, antennas, and numerical techniques applied to monolithic microwave integrated circuits. Dr. El-Ghazaly is a Fellow of IEEE. He was the chairman of Commissions A and D of the US National Committee of URSI. He was an elected member of the Administrative Committee of the IEEE Microwave Theory & Techniques Society (2001-1013). He was the Editor-in-Chief for the IEEE Microwave and Wireless Components Letters. He was the chairman of MTT-15 Committee on Field Theory. He was the General Chairman of the IEEE MTT-S 2001 International Microwave Symposium, which was held in Phoenix, Arizona, May 2001. He was the Chairman of the IEEE MTT-S Publications Committee (2004-2008). Dr. El-Ghazaly was the 2010 President of the IEEE Microwave Theory and Techniques Society. He also served as the Chair of the IEEE-Technical Activities Board’s Periodicals Committee (2012 & 2013) and the Vice Chair of the IEEE Publications Services and Products Board (2013). He currently serves as the Chair of the IEEE-TAB Periodical Review and Advisory Committee (PRAC).