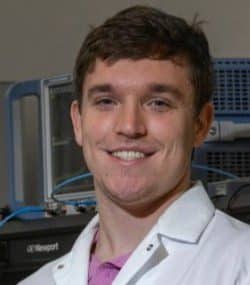 Ryan Cadwell received his B.S. and M.S. degrees in Electrical Engineering from Binghamton University in 2018 and 2020, respectively. In his undergraduate capstone work, for the Center for Advanced Microelectronics Manufacturing (CAMM), he led a team developing an in-line inspection system for roll-to-roll processing of thin film electronics – inspecting for damage, film thickness, etc. Between his B.S. and M.S. work, he was involved with Applied Materials’ flexible electronics research and development facility in Bavaria, Germany. There, he worked with a self-aligned imprint lithography process for precise roll-to-roll patterning of multilayer flexible electronics. During his M.S. work, also for CAMM, he focused on additively fabricated microwave electronics on flexible substrates. His primary focus was on aerosol jet printed components, as a part of an Air-force Research Laboratory (AFRL) funded NextFlex Consortium project. He also spent time in a BioMEMS and Bioelectronics course researching neuroelectronic interfacing and generating an idea for a novel probe geometry to potentially improve interface depth and reliability. As a part of his M.S. lab, he was also involved in work with GE Global Research, Corning, and the Nano-Bio Materials Consortium of SEMI and the Air-force Research Laboratory. He is currently an RF Engineer at TTM Technologies, Syracuse (formerly Anaren). There he works on design of and manufacturing support of circuit boards for radar and satellite communication systems.