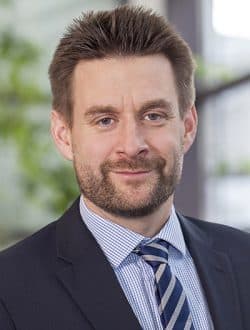 Rüdiger Quay (M’99 – SM’10) received the Diplom-degree in physics from Rheinisch-Westfälische Technische Hochschule (RWTH), Aachen, Germany, in 1997, and a second Diplom in economics in 2003. In 2001 he received his doctoral degree in technical sciences (with honours) from the Technische Universität Wien, Vienna, Austria. In 2009 he received the venia legendi (habilitation) in microelectronics, again from the Technische Universität Wien. In 2001 he joint the Fraunhofer Institute of Applied Solid-State Physics Freiburg, Germany where he first worked as a project leader in the development of 100 Gbit/s ETDM circuits based on InP HBTs, later as a group leader of RF-devices and circuit characterisation group working on mm-wave RF-devices and high-power devices and ICs. As of 2009 he was deputy head of the business field Gallium Nitride RF-power electronics with the Fraunhofer and also the deputy head department of microelectronics.

Since 2011 he is also a lecturer at the IMTEK, Albert-Ludwig University, Freiburg, Germany. Dr. Quay has authored and coauthored over 250 refereed publications, three monographs and contributions to two further. He holds two patents. Dr. Quay was the co-receipient of the best paper awards of the European Microwave Integrated Circuit Conference (EUMIC) in 2004, 2005, and 2006, and of the European Microwave Conference in 2012. In 2003-2004 he was a member of the IEDM technical committee on compound semiconductors, which he chaired in 2005. Since 2009 he is also serving in the TPRC of the MTT International Microwave Symposium and from 2009-2012 in the TPC of the European Solid-State Circuits Conference (ESSCIRC). Dr. Quay is vice-chairman of MTT-6, Microwave and Millimeter Wave Integrated Circuits, and since 2012, he is also a member of the IEEE Electron Device Society compound semiconductor subcommittee. In 2016 he is further in the TPC of the Future Security Conference, Berlin.

Since 2011 he is an Associate Editor of the International Journal of Microwave and Wireless Technologies and since 2013, of the IEEE Electron Device Letters (EDL).

The talk deals with high-efficiency techniques to design , layout, and realize high-effiency GaN-based circuits, such as base station amplifiers, radar ICs, and point-to-point links for various frequencies from L-band (1-2 GHz) to W-band (75-110 GHz) and beyond.

The specific impedance structure of GaN devices is discussed for multiple frequencies along with considerations of stability, trade-offs of gain compression, bandwidth and output power. Special care is devoted to understand high-efficiency modes of GaN, which can be approached, e.g. by active loadpull techniques and finally realized in package. The power range of the devices discussed includes 1 W to several 100 Watts, both as integrated circuits and hybrids.