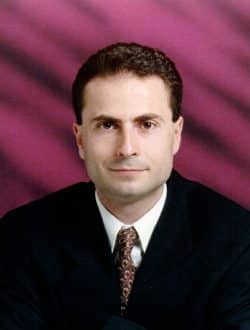 Roni Khazaka (S’92-M’03-SM’07) received his Bachelor, Master and PhD degrees in Electrical Engineering from Carleton University, Ottawa, Canada in 1995, 1998 and 2002 respectively. In 2002, he joined the department of electrical and computer engineering at Mcgill University, Montréal, Canada, where he currently associate professor of electrical engineering and associate dean (academic programs) of the faculty of engineering. In 2009 he was a visiting research fellow at the university of Shizuoka, Japan. In, 2017 he was a visiting researcher at Politecnico di Torino, Torino, Italy. Prof. Khazaka has authored over 70 journal and conference papers on the simulation of high-speed interconnects and RF circuits, his current research interests include electronic design automation, numerical algorithms and techniques, and the analysis and simulation of RF ICs, and high-speed interconnects.

Prof. Khazaka’s past awards and fellowships include the Microwave Theory and Techniques society’s 2002 Microwave Prize, The Natural Sciences and Engineering Research Council (NSERC) of Canada scholarships (at the masters and doctoral levels), Carleton University’s Senate Medal and University Medal in Engineering, the Nortel Networks scholarship and the IBM cooperative fellowship.

Prof. Khazaka served on several IEEE committees. He is the chair of the Montreal IEEE EMC/EPS joint chapter. He was IEEE Montreal Section treasurer (2005/2006), and IEEE Montreal Section chair (2013/2014). He is a member of the technical program review committee of the International Microwave Symposium since 2012, and the technical program committee of Electrical Performance of Electronic Packaging and System conference (EPEPS) since 2016. He served on the organizing committee and numerous conferences such as ISCAS, MWCAS, NEWCAS, ISSSE, CCECE, and the International Microwave Symposium (IMS). He was co-chair and general chair of the IEEE Electrical Performance of Electronic Packaging and Systems conference in 2018 and 2019 respectively.