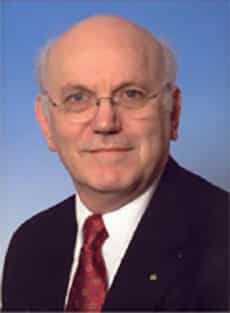 Roger D. Pollard (M’77-SM’91 -F’97) was born in London, England in 1946. He received his technical education, graduating with the degrees of BSc and PhD in Electrical and Electronic Engineering, at the University of Leeds, Leeds, UK. He holds the Agilent Technologies Chair in High Frequency Measurements and is currently Dean of the Faculty of Engineering. He was previously Head of the School of Electronic and Electrical Engineering at the University of Leeds where he has been a faculty member since 1974. He is an active member of the Institute of Microwaves and Photonics, which has over 50 active researchers, a strong graduate program and has made contributions to microwave passive and active device research. The activity has significant industrial collaboration as well as a presence in continuing education. Professor Pollard’s personal research interests are in microwave network measurements, calibration and error correction, microwave and millimeter-wave circuits, terahertz technology and large-signal and non-linear characterization. He has been a consultant to Agilent Technologies (previously Hewlett-Packard Company), Santa Rosa, CA since 1981. He has published over 100 technical articles and 3 patents. Professor Pollard was elected to the Royal Academy of Engineering in 2005. He is a Fellow ofthe IEEE (Citation: “for contributions to the development of microwave and millimeter-wave measurements, and active device characterization”) as well as a Chartered Engineer and Fellow of the Institution of Electrical Engineers (UK). He is an active IEEE volunteer, with strong participation in the IEEE Microwave Theory and Techniques Society where he has been involved with its Administrative Committee since 1980 including a term as President in 1998, as well as previously Chair of the Society’s Publications Committee, Budget Committee, Long-Term Planning Committee and currently Nominations & Appointments Committee. He was the 2003/2004 Chair of the Strategic Planning Committee of the IEEE Publications, Services and Products Board (PSPB). He has also served as Chair of the IEEE Technical Activities Board Products Committee and as Vice-Chair of the Publications, Services and Products Board (PSPB). He was Chair (1998-2000) of the TAB/PAB Electronic Products Committee, responsible for the development and introduction of IEEE-Xplore . He has also served on the IEEE Admission and Advancement Committee and the IEEE Fellow Committee and is currently a member of the IEEE Awards Board. He has served as Chair of the UKRI Section and on numerous other IEEE volunteer committees, groups and working parties. He is a member of the Editorial Board of IEEE Transactions on Microwave Theory and Techliiiques and has been oii the Technical Program Committee for the IEEE MTT-S Iiiteridatioidal Microwave Symposium since 1986 and is the TPC Co-Chair for the 2006 Symposium.