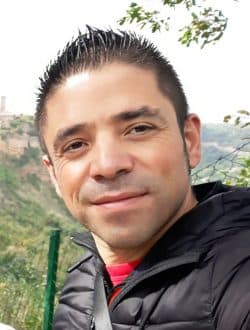 Rocco Giofrè received the Ph.D. degree in electronics from the University of Rome Tor Vergata, Rome, Italy, in 2008. He joined the Electronics Engineering Department of the same University in 2009, where He is currently an Associate Professor of Electronics. His research activities belong to the microwave and millimeter-wave electronics area ranging from active devices characterization to the design and test of linear and nonlinear circuits and systems. In this wide research area, he is mainly focused on the development of innovative power amplifiers’ (PAs) schemes and architectures with high efficiency and linearity for both ground and space communication systems, including their integration in multifunctional chips such as single-chip front ends. Some of his publications related to this field are still state of the art results, especially in terms of efficiency, bandwidth and output power.

He is an IEEE Senior Member since 2015, an Associated Editor of the IEEE ACCESS Journal since 2020, and the Chair of the Awards of the GaAs Association. He is reviewer for the major international journals and conferences in microwave electronics field (IEEE Trans. Microwave Theory and Technique, IEEE Microwave and Wireless Components Letters, IEEE Trans. on Circuit and Systems I and II, IEEE Access and IEE/IET Electronics Letters), and chair of technical sections at international conferences. He has contributed to the organization of several Workshops and Special sections during the major microwave conferences (Radio Wireless Week Microwave Symposium, International Microwave Symposium, European Microwave Week). His research achievements has resulted in more than 170 publications in journals and conferences, several invited papers, two patents, two book chapters and two contributions to Wiley Encyclopedia on Microwave Electronics. He was the recipient of the 2005 Young Graduated Research Fellowship and of the Best Paper Award at the EuMIC 2007 and ISMOT 2017 conferences. Moreover, two of his students in 2014 were awarded with the “Undergraduate Scholarships” and “Graduate Fellowships” from the IEEE Microwave Theory and Techniques Society (MTT-S).