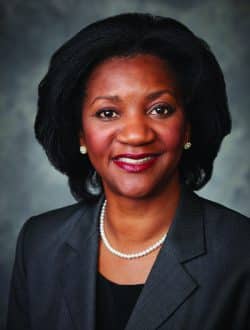 Rashaunda Henderson received the B.S.E.E. degree from Tuskegee University, Tuskegee, AL, in 1992, and the M.S. and Ph.D. degrees in electrical engineering from The University of Michigan, Ann Arbor, MI, in 1994 and 1999, respectively. From 1999 to 2007, she worked as a R&D device engineer at Freescale Semiconductor, formerly known as Motorola Semiconductor Product Sector.

Since Fall 2007, she has been investigating novel passive components and integration techniques for millimeter-wave circuits and systems. She advises a team of students in the design, fabrication and characterization of high performance transmission lines, circuits and electronic packages for frequencies operating up to 300 GHz. Dr. Henderson is a senior member of the IEEE.

Rashaunda is active in the MTT-S through MTT-11, the Education Committee and IMS TPRC. She is the treasurer for RWS 2015 and previously served as the Student Paper Contest Co-Chair from 2012-2014.