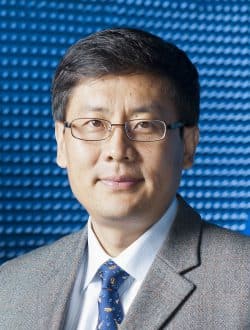 Professor Xue began his professional career in the Universisty of Electronic Science and Technology of China (UESTC) in 1993 as a Lecturer, immidately after he obtained his Ph.D. In 1997, he became a Professor in UESTC then moved to Chinese University of Hong Kong to work as a Research Associate and then a Research Fellow. In 1999, he joined the City University of Hong Kong as Senior Scientific Officer, and then promoted as Assciate Professor, Professor, and Chair Professor of Microwave Engineering. He also served the University as the Associate Vice President, the Director of Information and Communication Technology Center, and the Deputy Director of the State Key Lab of Millimeter Waves (Hong Kong). In 2017, he joined South China University of Technology. Now he is a Professor and serves as the Dean of the School of Electronics and Information Engineering, the Dean of the School of Microelectronics, and the Director of the Guangdong Key Laboratory of Terahertz and Millimeter Waves. He also serves as the Chief Scientist of Antenna in the 2012 Labs of Huawei Technologies. His is a member of Chinese National 6G Technology General Expert Group. He has published over 400 internationally refereed journal papers and over 150 international conference papers. In addition, he has held more than 50 Chinese patents and more than 30 granted US patents. Prof. XUE’s research interests include microwave/millimeter-wave/THz passive components, active components, antenna, microwave monolithic integrated circuits, etc.