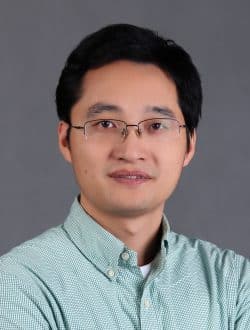 Qingfeng Zhang (S’07-M’11-SM’15) received the B.E. degree from University of Science and Technology of China (USTC), Hefei, China, in 2007, and the Ph.D. degree from Nanyang Technological University, Singapore, in 2011, all in electrical engineering. From June 2011 to December 2013, he was with the Poly-Grames Research Center, Polytechnique Montreal, Montreal, Canada, as a postdoctoral fellow. Since December 2013, he has been with Southern University of Science and Technology (SUSTech), Shenzhen, China, where he is now an Associate Professor with tenure. His research interests are largely in emerging novel electromagnetics technologies where he has a special interest in dispersion engineering at microwave and millimeter-wave frequencies. Dr. Zhang has authored/co-authored more than 200 peer reviewed journal and conference papers. He received URSI young scientist award and ACES young scientist award in 2018.

Dr. Zhang is a fellow of IET, and a senior member of IEEE. He is the Vice Chair of IEEE Antennas and Propagation Society Shenzhen Chapter. He served as an associate editor of IEEE Access from 2017 to 2020, and a Lead Guest Editor of Int. J. Antennas Propag. from 2014 to 2015. He was local organization committee Co-Chair of 2017 IEEE Electrical Design of Advanced Packaging and Systems (EDAPS) Symposium, TPC Co-Chair of Track 9 (Passive ICs and Active Antennas) in 2018 IEEE International Conference on Integrated Circuits, Technologies and Applications, TPC Chair of 2021 Cross Strait Quad-Regional Radio Science and Technology Conference, and General Chair of 2021 Computing, Communications and IoT Applications Conference.