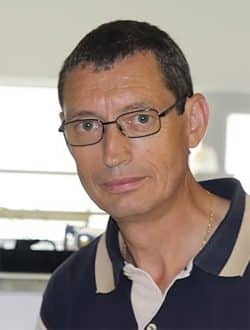 José Carlos Pedro is a Full Professor at University of Aveiro, Portugal, and President of the Institute of Telecommunications, where he also leads the Wireless Circuits and Systems’ research group. His main scientific interests include nonlinear analysis techniques, active device modeling and the analysis and design of various nonlinear microwave circuits, in particular highly linear mixers and multicarrier power amplifiers.

Pedro was editor-in-chief of IEEE Transactions on Microwave Theory and Technology, and leading author of Intermodulation Distortion in Microwave and Wireless Circuits (Artech House, 2003) and Nonlinear Circuit Simulation and Modeling – Fundamentals for Microwave Design (Cambridge University Press, 2018), He has contributed more than 200 peer-reviewed papers and conference presentations. He served on the IEEE Portuguese MTT/AP/ED Joint Chapter and the MTT-11-Microwave Measurements’ Technical Committee, and on organizing and technical program committees of a number of major conferences of his field, namely, the MTT-IMS and the EuMC.

Prof. Pedro received the Marconi Young Scientist Award in 1993, the 2000 Institution of Electrical Engineers (IEE) Measurement Prize and the 2015 EuMC Best Paper Microwave Prize. He was an IEEE MTT-S Distinguished Microwave Lecturer from 2014 to 2016, and in 2016 was awarded the Microwave Distinguished Educator Award. He is a Fellow of the IEEE.

He received his diploma, doctoral and habilitation degrees in electronics and telecommunications engineering, from the University of Aveiro, where he has taught since 1993.

The Wonderful World of Nonlinearity: Modeling and Characterization of RF and Microwave Circuits

Despite the many studies that have been undertaken to understand the wonderful world of nonlinearity, most undergraduate electrical engineering programs are still confined to linear analysis and design tools. As a result, the vast majority of microwave designers still cannot profit from the significant technological advancements that have been made in nonlinear circuit simulation, active device modeling and new instrumentation for performance verification. So, they tend to conduct their designs relying on experience, empirical concepts, and many trial and error iterations in the lab.
This talk will reveal the ubiquitous presence of nonlinearity in all RF and microwave circuits and the recent efforts made to understand, model, predict, and measure its diverse manifestations. We aim to bring microwave engineers’ attention to newly available techniques, and attract researchers to pursue further studies on this scientifically exciting topic.
Starting with some elementary properties of nonlinear circuits (like nonlinear signal distortion, harmonic generation, frequency conversion and spectral regrowth), we will show that nonlinearity is present in all wireless circuits, either to perform a desired signal operation or as unintentional distortion. In this way, we will show how oscillators, modulators or mixers could not exist without nonlinearity, while power-amplifier designers struggle to get rid of its distortion effects.
After this theoretical overview, we will introduce some recent advancements in nonlinear microwave circuit analysis tools and illustrate different types of models that are currently being used to represent and predict device, circuit, and system performance. Finally, we will focus the talk on the key metrics that are used to characterize nonlinear behavior, as well as newly developed lab instruments and their ability to assess device performance.