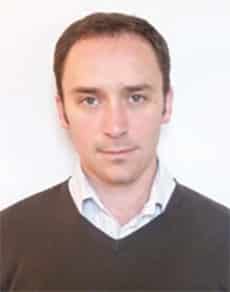 Pierre Blondy received the Ph.D. and Habilitation degrees from the University of Limoges, Limoges, France, in 1998 and 2003 respectively.

From 1998 to 2006, he was with the Centre National de la Recherche Scientifique (CNRS), as a Research Engineer with XLIM Laboratory, where he began research on RF-MEMS technology and its applications to microwave circuits.

He is currently a Professor at the University of Limoges, where he holds an Institut Universitaire de France chair, selectively awarded to faculty professors in France for research excellence.

He was a visiting researcher at the University of Michigan, Ann Arbor, USA in 1997 and at the University of California at San Diego, La Jolla, USA in 2006 and 2008. He was involved in many research projects, funded by national and european public agencies, and companies.

He has been working extensively on tunable filters, RF-MEMS components and reliability. He has introduced dielectric-less capacitive MEMS switches, that has permitted large improvements in reliability. This technique is further developped for tunable filters, with high linearity and low losses, by using multi bit arrays of these switched varactors. These developments include the creation of a start-up company, Airmems, aiming at the commercialization of these varactors. His group is also studying the properties of metal-oxide phase transition materials like Vanadium Dioxide, and their applications to microwaves. Practical microwave applications, like reconfigurable circuits, power limiters have been demonstrated for the first time using these materials. Recently, the group he founded has started research on the microwave properties of human brain stem cells, showing significant differences between cancerous and normal stem cells, using novel micro-machined microwave sensors. This work is currently being pursued, by teaming with medical research groups, in order to further investigate microwave properties of stem cells at the micrometer scale. Dr. Blondy was an Associate Editor for the IEEE Microwave and Wireless Components Letters in 2006. He is a member of the IEEE International Microwave Conference Technical Program Committee since 2003. He has authored or co-authored more than 150 papers in refereed journals and conferences, and holds 4 patents.