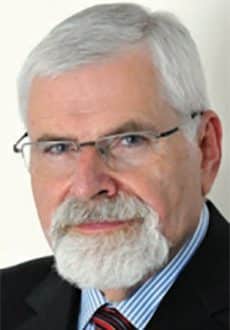 Peter Russer received his Dipl.-Ing. degree in 1967 and his Dr. techn. degree in 1971, both in electrical engineering and both from the Vienna University of Technology, Austria. From January 1968 to October 1971 he was with the Electrical Engineering Department, Vienna University of Technology. In 1971 he joined the Research Institute ofAEG-Telefunken in Ulm, Germany, where he worked on fiber optic communication, broadband solid-state electronic circuits, statistical noise analysis of microwave circuits, laser modulation and fiber optic gyroscopes. In 1979 he was co-recipient of the NTG Award for the publication “Electronic Circuits for High Bit Rate Digital Fiber Optic Communication Systems”. Since 1981 he has been Professor and head of the Institute for High Frequency Engineering at the Munich University of Technology, Germany. In 1990 and in 1993, respectively he has been Visiting Professor at the Universities of Ottawa and Victoria. From October 1992 through to March 1995 he was Founding Director of the Ferdinand-Braun-Institut fur H6chstfrequenztechnik, Berlin, Germany. In 1994 he was elected to the grade of Fellow of the IEEE for fundamental contributions to noise analysis and low-noise optimization of linear electronic circuits with general topology. From 1997 to 1999 Peter Russer was Dean of the Department of Electrical Engineering and Information Technology of the Munich University of Technology.

Peter Russer has published more than 500 scientific papers in refereed journals and conference proceedings. He has written two textbooks and edited one monography. His textbook “Introduction to information Technology” (in German) is an introduction into the broad field of electronics and information and communication techniques. In 1994 Professor Russer edited together with Johann-Friedrich Luy the book “Silicon-Based Millimeter-Wave Devices” which has been the first comprehensive book on silicon millimeterwave devices. In his textbook “Electromagnetics, Microwave Circuit and Antenna Design for Communications Engineering”, which appeared in 2003 and in 2006 in a considerably extended 2nd edition Professor Russer has introduced exterior differential forms which today are considered to be the most suitable framework for field theory. The teaching activities ofProfessor Russer comprise courses in electromagnetic fields, high-frequency engineering, linear, nonlinear and noisy microwave circuits and cquantum electronics. Over the years he has graduated more than 400 students of which more than 50 received their PhD degree. So far eight of his former students became Professors. In 2000 Professor Russer initiated the international graduate program “Master of Science in Microwave Engineering” at the Munich University of Technology.