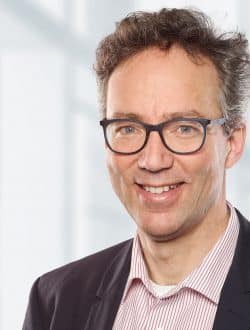 Prof. Dr. Peter Knott (M’96 SM’02) has received the Diploma and Ph.D. degree from RWTH Aachen University, Germany, in 1994 and 2003, respectively. In 1994, he joined the Fraunhofer Institute for High Frequency Physics and Radar Techniques FHR (formerly FGAN e.V.) in Wachtberg, Germany. From 2005 until 2016 he was head of the Department Antenna Technology and Electromagnetic Modelling (AEM), where the focus of his work was design and development of antenna arrays and active antenna front-ends as well as electromagnetic modelling and beamforming methods for conformal antenna arrays. Since 2016, he is Executive Director of the institute Fraunhofer FHR. He is currently holding a professorship of Radar Systems Engineering at RWTH Aachen University and lecturer at different other organisations.
Until 2012, he has been chairman of the NATO research task group SET-131 on Vibration Control and Structure Integration of Antennas. He has published numerous articles in scientific journals and on conferences and holds several patents. He was Co-Chair of the 14th European Radar Conference (EuRAD) in Nürnberg 2017 and General Chair of the International Radar Symposium (IRS) in Bonn 2018 and Ulm 2019.
Peter Knott has published numerous articles in scientific journals and at conferences, including several patents. Currently, he is also a “Member at Large” for AESA radar in the Sensors and Electronics Technology (SET) Panel of the NATO Science and Technology Organisation (STO), member of the Radar Systems Panel (RSP) in the IEEE Aerospace and Electronics Systems Society, Chairman of the Executive Committee of the German IEEE MTT/AP Joint Chapter, Chairman of the Technical Committee HF4 “Positioning” of VDE/ITG and member of the Scientific Advisory Board of the German Institute of Navigation (DGON) e.V.