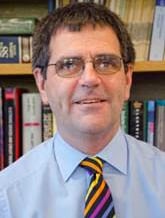 Peter Gardner is Professor of Microwave Engineering, Head of the Department of Electronic, Electrical and Systems Engineering and Head of the Communication and Sensing Research Group at the University of Birmingham. He received the BA in Physics from the University of Oxford in 1980, MSc and PhD in Electrical Engineering and Electronics in 1990 and 1992 respectively, from UMIST in Manchester, UK. He was appointed as lecturer at the University of Birmingham in 1994 and was promoted to Professor in 2015. He has a wide range of research interests in the theory, technology and applications of the RF, microwave, mm-wave and THz bands.