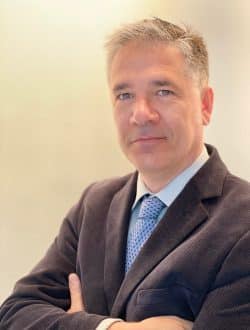 Pedro de Paco Sánchez was born in Badalona, Spain. He received an Engineer degree in Telecommunication in 1997 and a Ph.D. degree (Cum Laude) in 2003 from the Universitat Politècnica de Catalunya (UPC). In 1998, he joined the Electromagnetic and Photonics Engineering Group (EEF), signal theory and communications department (TSC-UPC) with a grant from the Institut d’Estudis Espacials de Catalunya (IEEC) in a joint activity related with the European scientific space mission Planck. He was member of the LFI-Radiometer working group and the Planck Consortium. From 1999 he was a member of the EEF group and from 2003 to 2004 he was an associate professor at the Universitat Politècnica de Catalunya. He has participated in several national and international research projects, mostly related to microwave and millimetre-wave circuits and systems applied to design and testing of remote sensing instruments and front-end point-to-multipoint broad-band communication systems.

From 2004 he holds an Associate professor position with the Telecommunications and Engineering System at the Universitat Autònoma de Barcelona, where he teaches RF/Microwave engineering courses, and he has been Deputy Director. A long this time he starts and strength an independent research activity leading the Antenna and Microwave System Group and the Acoustic Filtering Device Lab Team focused in the design and integration of methodologies for AW filter based on advanced synthesis techniques. He is co-author of more than 90 papers in international journals and conferences.  His research interests are currently focused on micro-acoustic filtering devices for applications in wireless and mobile communication systems, through the comprehension of interplay between the structure, the materials and the functionality.

He has been PI of several national and international projects, reaching funds in both public and private sector. He has served as a consultant for a number of private companies of Telecommunications and Mobile sector. During 2018-2019 he was invited as Visitor Researcher by Colorado University-Boulder. He has served in many scientific committees and academic boards; he is member of European Microwave Association, of the Spanish networks of antenna (REsA) and reviewer of several IEEE journals, and European Microwave Conference. His research group has been awarded by Generalitat de Catalunya.