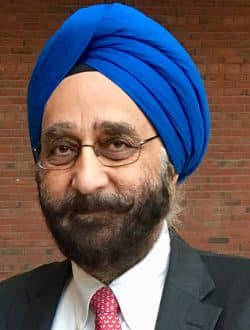 Amarpal (Paul) Khanna, Life Fellow IEEE is a leading practitioner and researcher in the field of RF, Microwave and Optics Technology. He has a Doctor of Engineering (1981) from the University of Limoges, France. Dr. Khanna has 40 years’ experience in Design Engineering, Design Engineering Management and Business Development in the field of RF/Microwave to Millimeter wave components and sub-assemblies in military, commercial, instrumentation, wireless and high-speed optics markets. Dr. Khanna is presently an industry consultant in the Bay Area, California. He was a Distinguished Engineer at National Instruments until October 2020. At NI he drove innovation in the development of front-end technologies of the test solutions for applications including 5G, Automotive RADAR and Automotive LiDAR.

He was previously Vice-President of Engineering at Phase Matrix Inc., San Jose, CA. Dr. Khanna has also held leadership positions at Avantek, Hewlett Packard and Agilent Technologies. He has published/presented more than 60 articles in international journals and conferences. He has 7 US and 2 European patents and contributed chapters in three microwave circuits books. In addition to his commitments in the industry, Dr. Khanna was also an adjunct professor at Santa Clara University where he taught a graduate Microwave and RF measurements course. Dr. Khanna is also active in IEEE. He was an elected member of the IEEE MTT AdCom from 2017 to 2019. He was TPC co-chair for IMS 2006 and has been the local MTT chapter chairman. He was the General Chair for the IEEE IMS2016 conference. He is presently Vice-Chair IMSEC committee of MTT Society. In 2013, Dr. Khanna was inducted into the list of honorary Microwave Legends by Microwave & RF Magazine.